Xbox One getting Dolby Atmos support in ear-splitting update 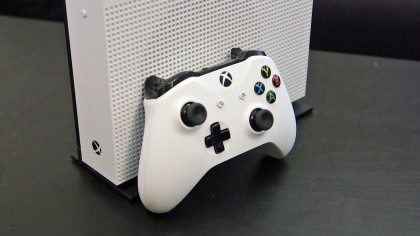 Worried your surround sound system might wake the downstairs neighbours? If you’ve the right audio kit and an Xbox One or Xbox One S, you might have to start considering those living above you too – Microsoft has just announced that overhead Dolby Atmos surround sound is soon to be supported by its slimline console.

Calling all audio aficionados. Rolling out to Preview this week: Blu-ray Bitstream pass-through including Dolby Atmos support on Xbox One/SDecember 12, 2016

Originally announced back in October, Xbox mouthpiece Larry “Major Nelson” Hryb revealed that those on the Xbox One Preview Program will be gaining access to Dolby Atmos options this week.

It’s achieved via Bitstream pass-through. To activate Dolby Atmos support on your Xbox, head to the Blu-ray disc options screen and check where it says “let my receiver decode audio (beta).”

‘You don’t do ‘eavy metal in Dubly’

Dolby Atmos support has been limited for gamers so far. Though Star Wars Battlefront was the first game to include the sound option, it was available only to players of the PC version of the first person shooter. Overwatch followed earlier this year, but it was restricted to use with compatible headphones only.

In terms of console support, Atmos has until now yet to feature due to its sizeable CPU requirements. It takes a lot of processing grunt to deliver as many as 128 discrete audio channels at once, which at launch the Xbox One (and by virtue of no similar announcement, the PS4 line-up) presumably couldn’t cope with.

As it’s say nestled under the Xbox One’s Blu-ray disc options menu, it seems that for now the Dolby Atmos tech will be limited to Blu-ray playback. Hopefully this will open the floodgates for wider gaming support too.

But if you’ve got a 4K-ready Xbox One S sitting under your telly and Dolby Atmos speakers pointed towards the heavens, you’re now set for a cinephile’s dream Christmas.

Building as a modular gadget

Super Bowl 2019 live stream: how to watch online from anywhere in the world

Tiny chip looks deep inside your body with millimeter-wave radiation

Dartz Department of Opulence: When even ultra-luxury won’t do

CES 2020: Everything we expect to see at the world’s biggest tech event