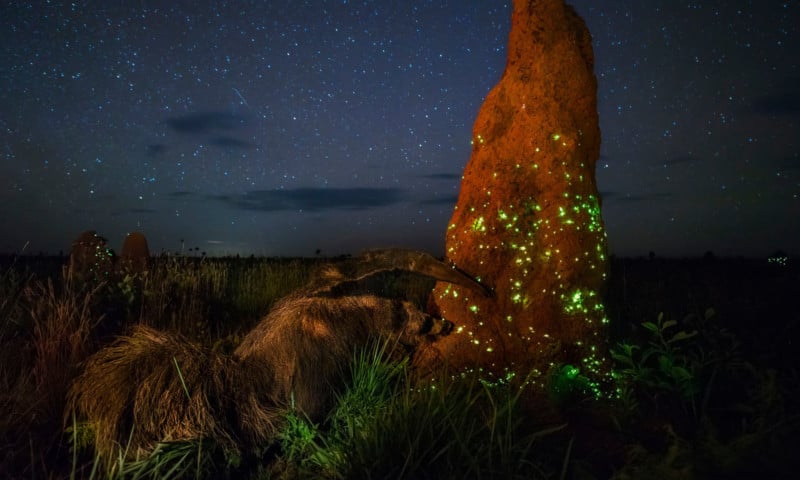 A winner of the prestigious Wildlife Photographer of the Year photo contest has been stripped of his award after it was discovered that the anteater seen in the photo is a stuffed animal that was Photoshopped in.

Brazilian photographer Marcio Cabral had won the “Animals in Their Environment” category for the 2017 contest with his photo titled “The Night Raider” (shown above). The photo appeared to show an anteater at a termite mound, and this is what the caption stated:

For three seasons, Marcio had camped out in Brazil’s Cerrado region, on the vast treeless savanna of Emas national park, waiting to capture the termite mounds’ light display. Click beetle larvae living in the outer layers of the mounds flash their bioluminescent “headlights” to lure in prey – the flying termites. Out of the darkness ambled a giant anteater, oblivious of Marcio in his hide, and began to attack the tall, concrete-mud mound with its powerful claws to reach the termites deep inside.

But after the award was announced, someone apparently noticed something strange: the anteater in the photo looked remarkably similar to a stuffed anteater found at one of the entrances of the same national park.

The National History Museum, which owns and operates the prestigious contest, then enlisted the help of five expert scientists to investigate. The team comprised two mammal experts and a taxidermy specialist at the NHM, as well as two external experts (one in South American mammals and one specifically in anteaters).

After comparing the anteater in the winning photo with the stuffed on at the park, all five scientists independently concluded that the two were exactly the same anteater.

They “all reached the same conclusion that there are elements in overall posture, morphology, the position of raised tufts of fur and in the patterning on the neck and the top of the head that are too similar for the images to depict two different animals,” the museum writes.

The museum also asked Cabral to supply RAW files, and the photographer provided photos shot “before” and “after” the anteater photo… with none of the other photos containing the anteater.

“Mr Cabral did provide an explanation as to why he had no other images of the anteater,” the museum says. “He also provided a witness who claims he saw the live anteater.”

“Unfortunately, I do not have another image of the animal because it is a long exposure of 30 seconds and ISO 5000,” Cabral tells BBC News. “After the flashes were fired, the animal left the place, so it was not possible to make another photo with the animal coming out of the place that is totally dark.”

If the anteater in Cabral’s photo is the stuffed one at the entrance of the park, then Cabral presumably photographed it separately and then Photoshopped it into the termite mound photo.

After its “careful and thorough investigation,” the National History Museum announced today that Cabral’s photo has been disqualified and the photographer has been stripped of his prize. The photo will also be removed from the contest’s exhibition and tour.

Apple Watch sale: the Apple Watch Series 3 gets an $80 price cut at Walmart

The Advent of Apple's New MacBook Air and iPad Pro Arrived! Will Its Keyboards Do Its Job?

Mass Effect: Andromeda Doesn&rsquo;t Have the Paragon and Renegade System to Give It a Traditional RPG Feel