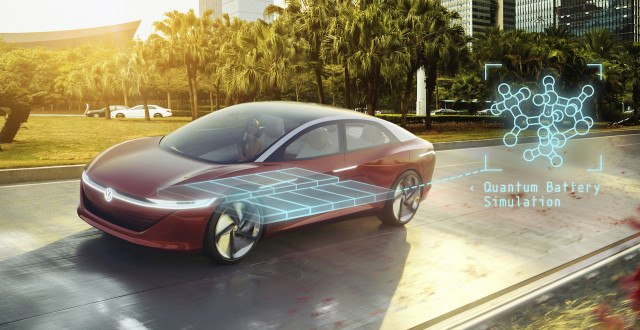 VW to use quantum computers in electric-car battery development

The news last week came after VW announced a partnership with Google over quantum computing last November. The automaker said it planned to develop the algorithms, simulations, and optimizations with experts from Google and feed that information into Google’s quantum computers.

The latest quantum computer research comes from VW’s CODE Lab in San Francisco. The facility’s newly developed algorithms can now begin to simulate the structure of an electric car’s battery. Thus far, experts in the lab have successfully simulated molecules such as lithium-hydrogen and carbon chains. VW will present its research into quantum computing at the CEBIT technology show in Hanover, Germany, this week.

In the future, the quantum computers will ideally be able to simulate a full battery and take weight reduction, maximum power density, or cell assembly into account. Then, according to VW, a quantum computer could provide a battery design, which will be a configurable chemical blueprint ready for production. The process would free up countless resources and accelerate battery development.

The quantum computers will likely support VW’s aggressive electrification strategy. The global automaker plans to introduce one electric car per month beginning in 2022, and in total, the Volkswagen group (including Audi, Bentley, Seat, Skoda, and Volkswagen) will offer 300 electrified cars, many of which will be electrified versions of current and future models. “Electrified” can range from a mild-hybrid to a plug-in hybrid to a battery-electric vehicle.

To accommodate production of the electric cars, the company will adapt nine production sites to handle electric-vehicle production. The figure will grow to 16 by 2022. In the U.S., we know VW will produce the ID Buzz electric van, along with a cargo van and a hatchback by 2022.

Here's where the Lotus Evija hypercar is born

Headsets are just the beginning: here's what's next for VR

Colleges Are Overreacting Like Your Parents And Banning Hoverboards

Some Windows 10 on ARM laptops can run Linux (with caveats)

Chevrolet will only build the 2018 Corvette for four months

Blizzard Explains Why Heroes of the Storm Doesn&rsquo;t Have Fortnite-Like Battle Pass

LawBreakers Borrows from Quake Champions and Overwatch, but Gets It All Wrong

2021 Cadillac Escalade vs. 2020 Lincoln Navigator: How the full-size SUVs compare