Venus and Moon to ‘Share a Celestial Kiss’ in the Sky: When's the Right Time To Take A Peek?

Hoping that everyone has clear skies on Thursday, Feb. 27, go and have a look at the southwest in just about 45 minutes after sunset and you can definitely see a beautiful celestial event happen. 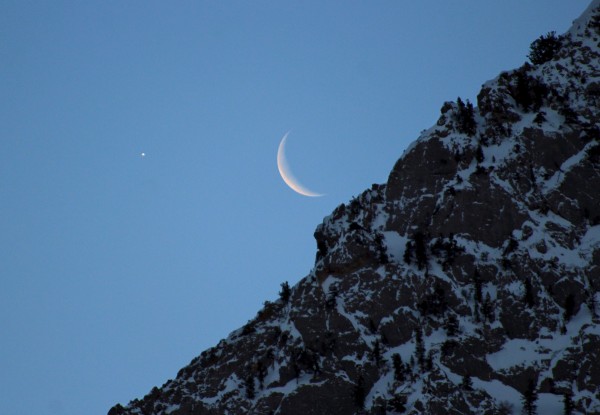 When this astral event happens, it would appear as if they are super close, but that is not the case. In reality, Venus and the Moon are millions of miles away from each other. It’s all in the matter of perspective.

The moon and all the planets orbit on the same passage through the sky, which is called Ecliptic. This is what scientists call “the plane” of our solar system, and it is only right that from time to time, the moon and the planets appear to pass close to each other in the night sky.

When is the right time to take a peek at Venus and the Moon?

This curved crescent moon will be very visible beside the bright planet, Venus, just below the Aries constellation and the best way to see this wonderful space event, is only 45 minutes after sunset and six degrees below and to the left of the moon, as seen from the Northern Hemisphere.

It would not be that hard to view Venus and the Moon since they are both the brightest objects in the sky, aside from the sun.

Read Also: Dwarf Planet Officially Receives A Name: The Mystery Behind The Name Will Fascinate You!

If you aren’t able to see this celestial event happen this week, don’t fret because this will happen again, in fact, Venus and the Moon will meet each other again in a month’s time, March 28. It will also be a bit close to the planet Uranus though it is advised to use a telescope to see his seventh planet.

Venus is particularly bright this year as seen from earth. It reported to apparently be brighter as time goes by and will reach its brightest in early May before disappearing and will become a “Morning Star” in the half of 2020.

This is not the first time it has happened this year. In January, Venus swung by the moon, and it was beautiful. The four-day-old moon at this time just reached its new phase nad it passed over 4 degrees south of Venus and 30 degrees above the southwest in the Aquarius constellation. It shines at a magnitude of -4.1 and ill be brighter in April when it hits -4.5 magnitude.

No doubt, this will definitely attract everyone to will go outside to see this beautiful event, take out their cameras and phones, snap a photo and post it on social media, especially for photographers out there who are interested in Space Photography. So, if you can’t take your own pictures, give it a few hours, and you’ll see just how wonderful Venus and Moon will look like.

Flair’s Smart Vent system is a big improvement for anyone looking to improve their home HVAC
For the theremin’s 100th anniversary, Moog unveils the gorgeous Claravox Centennial
more news from the blog

Barbie becomes a hologram version of herself

This SLR Camera Was Made for Wildlife Photography a Century Ago

How to strike balance between supervised and unsupervised machine learning

Nearly 48% of drivers are willing to give up car ownership for autonomous mobility, reveals report

Samsung’s Galaxy S8 is now on sale in the U.S., Canada and Korea with more launches to come

Save 40% off Adobe Creative Cloud for one day only

Who really owns your phone?

‘The Expanse’ finds a new home on Amazon Prime