That’s where the human eye comes in. Here are eight tips to keep in mind when composing that shot, whether of family during the holidays or sights during a vacation. You don’t need to own a fancy camera or mess with manual controls.

What’s the subject?
Give people something to latch onto when viewing your photo. As a rule of thumb, close-ups are better.

At a party, for instance, avoid wide shots of random people mingling in a room, as the room becomes the subject and that’s boring. Instead, get close-ups of the guest or two who’s laughing or singing. The photo is now about people having fun at a party.

People mingling can still be part of the shot, but in the background, to give people a sense the party’s well attended. The same principle applies to parades: It’s better to home in on one or two drummers than on the entire marching band, though the rest of the band can still be in the background.

For landscapes, keep in mind that it’s tough to give viewers the same sense of grandeur you get from being there in person. But you can nudge viewers by focusing on specific elements, such as mountains or some trees. And of course, if there’s wildlife well, that’s your subject.

Beyond eye level
Be willing to crouch down or even lie on the ground to give viewers a fresh perspective. When I encountered a lizard in Singapore, my instinct was to snap while standing up. But the lizard looked generic from that angle and distance. It wasn’t until I brought my camera near the ground and get close up did the lizard look ferocious. The good thing about smartphone cameras is that you can change the perspective easily by just lowering the phone.

Play around with depth
For those obligatory poses next to landmarks, there’s no law saying you must actually stand next to the landmark. If the landmark is huge, you’ll look tiny by comparison. Why not stand closer to the camera? Since photos are two-dimensional, it’ll still look as though you’re next to the landmark, but you’ll look appropriately sized. You might need to try various depths until you get it right.

Consider the background
While it’s important to have a clear subject in your shot, the background can enhance it by placing the scene in context. I took several shots of people riding elephants in Ayutthaya, Thailand. The ones that stood out had Buddhist stupas in the background. The other shots could have been taken anywhere, such as a local zoo. 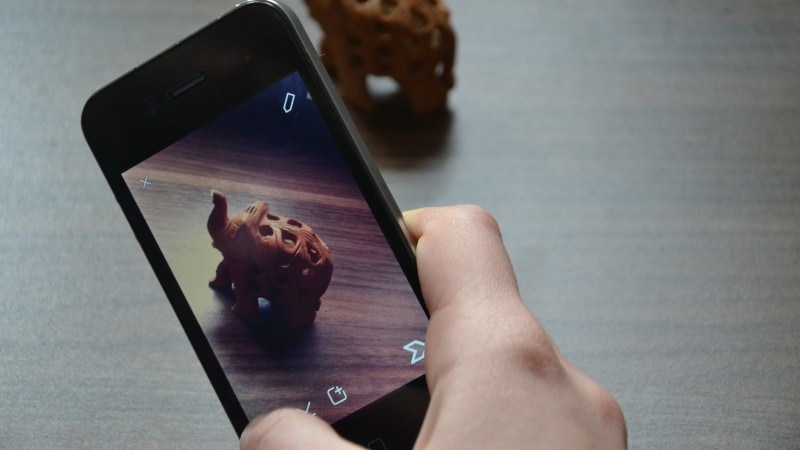 Watch the lines
In general, aim for horizontal and vertical lines in shots. For a skyline or a bench, that means taking the shot straight on and avoiding tilt. But diagonal lines can enhance photos at times. For instance, they can lead the eyes outward to give the viewer a greater sense of depth. But make sure you’re trying to say something with the diagonal. If the skyline or the bench is tilted, it will just look lazy, not artsy.

The rule of thirds
Divide your frame into thirds horizontally and vertically, like a tic-tac-toe board. Some cameras will even draw these lines for you on the screen (but won’t include them in the final shot). Ideally, keep your main subjects where those lines intersect, as eyes tend to gravitate there first. If you’re shooting a horizon or skyline, have it match one of the imaginary horizontal lines. For shots of people, have the eyes fall along one of those lines.

Lighting matters
You’ll typically get the best lighting shortly after sunrise or before sunset. During these “golden hours,” sunlight is softer, and subjects look better.

But it’s not practical to constrain your sightseeing to just a few hours a day. At least try to avoid having the sun shine toward the camera, as that leads to dark subjects. If you can’t avoid it, some cameras have an “HDR” mode to help. The camera basically stitches together separate shots of the subject and the background adjusted to different lighting conditions. Turning on the flash yes, in daytime can also help light up an otherwise dark subject.

At night, though, you should try to keep the flash off, as light distribution can be intense and uneven. Cameras have gotten much better at low-light shots, such that you’re often better off working with ambient light. Bonus tip: Use the flashlight on a friend’s phone to add a bit more light to a scene.

Know your camera’s limitations
While many cameras now have auto-focus, they don’t always pick out the subject correctly. If you’re shooting with a smartphone, just tap on the intended subject on the screen. This also has the effect of adjusting the exposure to that subject, rather than something in the background you might not care as much about.

And unless you have an iPhone 7 Plus or a Motorola Moto Z with True Zoom, avoid zooming. With most smartphones, you’re just getting a fake zoom, also called digital zoom. The image isn’t actually getting larger it’s just stretched out like elastic using software. It might be fine on the screen, but it’ll look fuzzy blown up on a desktop web browser or printed out for a photo frame.

1-of-40 Ford GTX1 roadster conversion up for auction

In Europe, Facebook’s data law buffer looks to be on borrowed time

Moment Pro camera update: Even without an external lens, the app takes your phone to the next level

Fujifilm X-H1 vs X-T2: 8 key differences you need to know

Facebook reports spike in posts taken down for promoting hate

How I Wait Years to Get My Photos

R is for…? Find out what the R in Canon's EOS R actually means