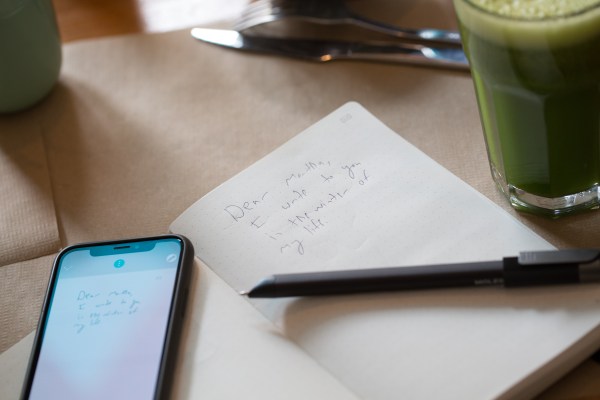 Moleskine, to the uninitiated, makes notebooks and stationery popular with artistes, travelers, and folks who jot down poetry in between sips of chai latte in some delicate cafe in Kreuzberg. They are rugged little things that resisted the encroachment of high tech but now, thanks to the PEN+ ELLIPSE, you can turn your musings into digital files instantly.

The PEN+ ELLIPSE is a surprisingly compact pen that uses special paper notebooks and a built-in sensor to record what you draw and automatically send it to a phone or tablet. Further, the pen can record your writings and then send it to your phone later, thereby ensuring that you don’t miss a thing even if your devices are packed away.

It’s a clever – and at $179, a pricey – solution. I’ve used a number smart pens over the years and this one is surprisingly compact and usable. I especially like the off-line mode which, provided you turn the pen on, allows you to record without having your phone open next to your notebook. If you do have your phone open, however, it’s quite magical to see your writing appear on screen as you scribble.

Unlike its closest competitor, LiveScribe the PEN+ ELLIPSE doesn’t record audio as you write, making it a little less interesting for note-taking. However, the many features associated with the pen and app combo – including the ability to change color and line styles as you draw – makes this solution a bit more interesting for artists.

While nothing beats a Madeline, a Moleskine, and a Palomino Blackwing on the banks of the Seine, this clever and compact digital pen solution is the next best thing to staying fully analog.

13 TechCrunch Stories You Don’t Want To Miss This Week

Cortana had a crappy CES

Apple in talks with potential suppliers of sensors for self-driving cars: Sources

This absurdly cheap wooden PC has a devastating flaw

The cloud continues to grow in leaps and bounds, but it’s still AWS’s world

10 camera backpacks and bags to protect your DSLR and lenses

You’ll be shocked by what a Koenigsegg Regera can withstand

Panasonic will no longer sell its TVs in Australia

Amazon has a big surprise event today – will we see the Amazon Echo 2?

How to get Android 7.0 Nougat on your Nexus right now

Netflix cuts support for beaming your streaming video via AirPlay

Crash Bandicoot could spin onto mobile

This $550M fund is bringing green tech from the West to China, despite trade tensions