Samsung Galaxy S9 and Galaxy S9+ have received their latest software update with build number XXU1ARCC on both variants in markets including India. According to the changelog, a couple of new features have been added to the Galaxy S9 duo. These include an improvement in call stability and enhancement to wallpapers on the two smartphones. To download and install the update, go into Settings > Software Update > Download Updates Manually. In our case, size of the update was around 317MB. 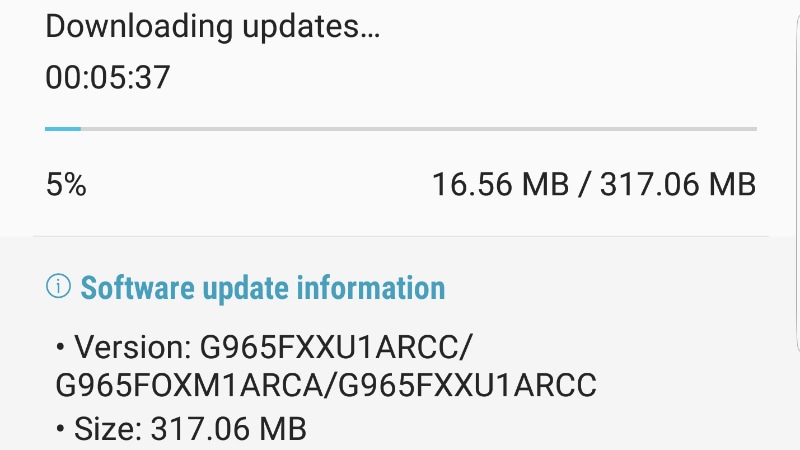 Just to briefly recap, the Galaxy S9 and Galaxy S9+ are powered by the company’s latest Exynos 9810 SoC, in markets including India, and Qualcomm’s latest Snapdragon 845 SoC in markets such as US and China. The Galaxy S9 comes with 4GB RAM, Galaxy S9+ has 6GB RAM; both are available in 64GB/ 128GB/ 256GB storage variants. The Galaxy S9 duo comes with Android 8.0 Oreo out-of-the-box, IP68 water resistance, dual-band Wi-Fi 802.11ac, USB Type-C, and Bluetooth 5.0.

Both phones sport QHD+ Curved Super AMOLED displays with an 18.5:9 aspect ratio; the Galaxy S9 has a screen size of 5.8 inches while the Galaxy S9+ gets a larger 6.2-inch panel. Both handsets also have an identical front camera with an 8-megapixel autofocus sensor and f/1.7 sensor. The primary rear cameras on both phones have a Super Slow-Mo feature that allows video recording at 960FPS. However, the Galaxy S9+ has a dual rear camera setup while the smaller, Galaxy S9 does not.

Royole returns with another foldable

Best mobile workstations 2019: the most powerful laptops for businesses

B&H Sued by US Government for Discrimination

Android feeds my constant yearning for something better

Siberian Tigers Take Down and Chew Up Drone

Alexis Ohanian files for a new $150M fund, with a nod to his Olympian family

This Valentines Day, protect yourself

Lenovo is adding Linux to all its workstation products

Watch how Rimac builds its supercars

‘In the Hands of the Father’: Photos of My Dad’s Battle with Alzheimer’s

iPhone 7 Has Third Best Smartphone Camera DxOMark Has Ever Tested