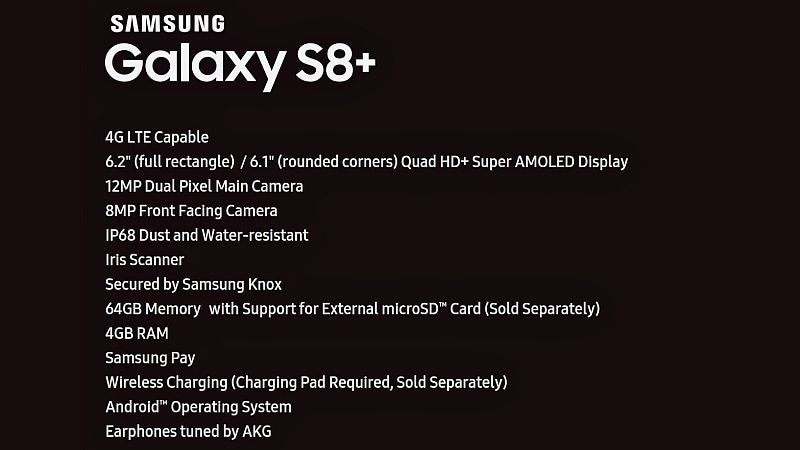 Another day, and yet another leak related to Samsung’s upcoming premium Galaxy smartphones comes our way. A specifications list of the yet-to-be-announced Galaxy S8+ has been leaked, revealing almost everything. According to prolific tipster Evan Blass aka @evleaks, the Galaxy S8+ will indeed sport a large 6.2-inch Super AMOLED display.

In a tweet, Blass shared a list claiming to show Samsung Galaxy S8+ specifications. The leaked list shows that the smartphone will feature 4G LTE support and come with a QHD+ screen resolution. The Galaxy S8+ is further said to pack 12-megapixel ‘dual pixel’ primary camera, and an 8-megapixel front camera. Much like the Galaxy S7, the Galaxy S8 is said to come with an IP68-rating for dust and water resistance. One of the biggest highlights of the new Galaxy S8 series is said to be the iris scanner which is corroborated by the new leak as well. The Galaxy S8+ is said to pack 64GB of inbuilt storage and support expandable storage via microSD card. The handset is said to come with 4GB of RAM, and support Samsung Pay. Some of the other features claimed by the leaked list include Samsung Knox, wireless charging support, and earphones tuned by AKG.

Recently, Samsung’s Mobile Chief Koh Dong-jin reportedly confirmed that the company would reveal the official launch date for the Galaxy S8 launch at MWC 2017 next week.

Both the Samsung Galaxy S8 and S8+ are expected to debut in March and are rumoured to go on sale from April.

Civilization 6: Rise and Fall System Requirements, Release Date, Price, New Leaders, and Everything Else We Know

PanoClip Helps You Shoot 360° Photos with Your iPhone’s Cameras

Instagram is testing a standalone app for direct messaging

The Mandalorian season 2 is coming in 2020, creator Jon Favreau confirms

Apple TV 4K Review Roundup: Impressive, But Not Enough Bang For The Buck

Apple's India Manufacturing Demands Will Be Looked at After GST Rollout: Sitharaman

This self-cleaning textile could be the future of space-wear

A Star-Stack Timelapse of a Lightning Storm in Hawaii

US Open 2019 live stream: how to watch the tennis online from anywhere

The age of cyber-warfare

Jeep descends on downtown Toledo to celebrate its 75th anniversary

Bag Week is coming and we need your recommendations

Russian manufacturer Kalashnikov moves from AK-47s to an electric car

Nearly 70% of US smart speaker owners use Amazon Echo devices

Games have learned from films – but can films learn from games?