The Samsung Galaxy S8 and Galaxy S8+ (review) are perhaps some of the most high profile smartphones launched in a while. For Asia, Europe, Middle East, Africa, and India, specifications include an Exynos 8895 octa-core SoC, Mali-G71 MP20 GPU, and 4GB of RAM. The US version has the same amount of memory, but it gets Qualcomm’s MSM8998 Snapdragon 835 processor and an Adreno 540 GPU. According to our Samsung Galaxy S8 and Galaxy S8+ review, the Exynos version has proven to be an absolute beast in terms of benchmarks.

A glitzy reveal promised support for VR, syncing with your appliances (if they’re from Samsung), and even Bixby (its bespoke digital assistant). If you’re planning to make use of all the horsepower that comes with the Galaxy S8 and the Galaxy S8+, then you’re probably going to spend more time playing games than anything else.

To find out how well the phones work in terms of real-world performance, we took some of our favourite, more graphically intensive games for a spin with this new mobile hardware. Basic 2D titles like Candy Crush Saga or simple games like Subway Surfers work fine on even entry-level phones, so they’re not on the list below. If you’re serious about gaming on your phone, here’s what you need to know about the Samsung Galaxy S8 and Galaxy S8+.

You can change this in the Settings menu with the help of slider to hit its native 1440×2960 resolution, or drop to 720×1480 pixels. The lowest resolution makes text appear jagged, and also lowers details in-game, to make for a not so ideal experience. The screen sizes coupled with the higher resolution options ensure that there’s little to choose between the other two in most cases. Personally, we prefer the highest resolution, or the WQHD+ option as it is called, with Game Mode switched on. What’s that you ask?

Samsung Galaxy S8 and Galaxy S8+ Game Mode, Game Launcher, and Game Tools explained
According to Samsung’s description of it, Game Mode exists to “enhance your gaming experience by making games run more smoothly.” And while that might sound simple enough, there’s a lot going on.

Enabling Game Mode in the Device Maintenance section found in Settings also brings Game Launcher, and Game Tools. Game Launcher arranges all your games in one place, and optimises gameplay as per Game Mode settings, while the latter handles tasks like taking screenshots, recording video, and toggling to full screen mode, as not all games support the Galaxy S8 and Galaxy S8+’s 18.5:9 aspect ratio.

PC gamers should be right at home with these settings and options as they essentially mimic the core functionality of Nvidia’s GeForce Experience software for Windows PCs.

Samsung Galaxy S8 and Galaxy S8+ gaming performance
To see how much of an impact all these settings – and the hardware in the phones – made, we tried a number of graphically demanding games. First up was Warhammer 40,000: Freeblade. This is an on-rails shooter in the style of classics that it takes place in the distant future and you’re a giant robot killing orcs, space demons, and all sorts of abominations. Granted, the game was shown off when Apple revealed the iPhone 6s and iPhone 6s Plus, but its high resolution textures, special effects, and the huge amount of onscreen action make it worth checking out on your Android smartphone as well.

Gameplay was buttery smooth on the Galaxy S8 and Galaxy S8+, with no stutter even at native WQHD+ resolution, with Game Mode and Game Launcher off. You could be mowing down orcs or engaging in fisticuffs with giant weapons of death, and the action didn’t skip a beat. It was even smoother at the lowest 720×1480 resolution, but the trade-off in terms of graphical quality was not worth it at all.

Next on the list was Asphalt 8. Gameloft’s latest entry in its long-running racing series looks great and plays just as good too. Barring the odd low quality texture — particularly in the game’s opening dirt track – it looked great and played well. In fact, it was the only game we tested that did not need us to use Game Tools to stretch out the resolution, so we could play without black bars on either side. 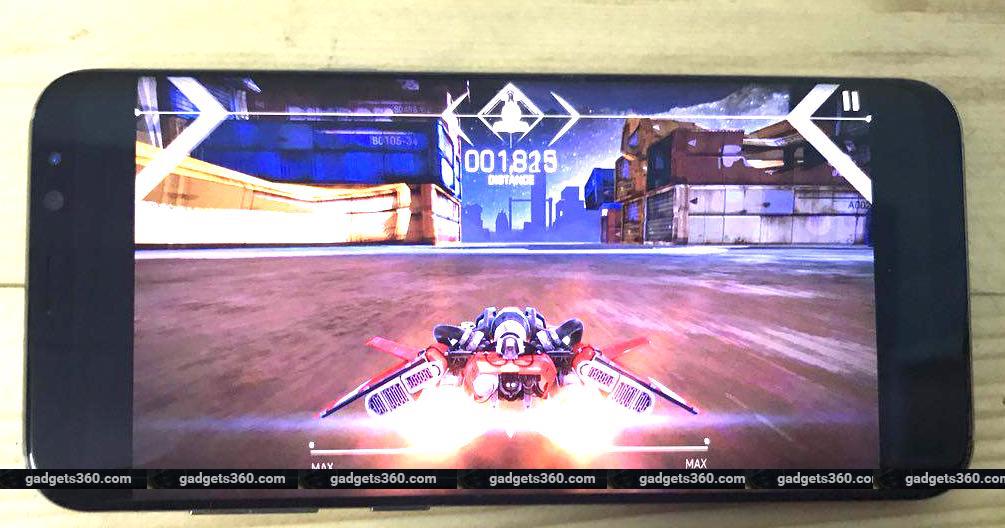 After this, we tried Breakneck. This is a futuristic racer with stylings that wouldn’t be out of place in Sony’s Wipeout games, or Fast RMX Racing on the Nintendo Switch. It looks fantastic, with an emphasis on speed and special effects. However, the performance we experienced on our Galaxy S8 and Galaxy S8+ was inconsistent. For most part, it was smooth until we encountered enemies and were prompted to use boosters to outrun them.

In these scenarios – which occur frequently – we’d see a massive drop in frame rate, where it felt as if a PowerPoint slide would load faster. It was here that Game Mode and Game Launcher on the Galaxy S8 and Galaxy S8+ pulled their weight. Enabling these ensured silky smooth gameplay, albeit at a very perceptible dip in resolution. While the drop in resolution was evident, it did little to put a damper on the proceedings. The sense of speed in Breakneck more than made up for it. Hopefully a patch from the developer fixes these issues.

In Vainglory, mobile gaming finally has a competent answer to Dota 2. The game’s touch controls and emphasis on quick responses were far from hampered on the Samsung Galaxy S8 and Galaxy S8+. There was no issues in terms of lag between our inputs and the game presenting them onscreen. At the same time, its frame rate remained stable while maintaining visual fidelity. 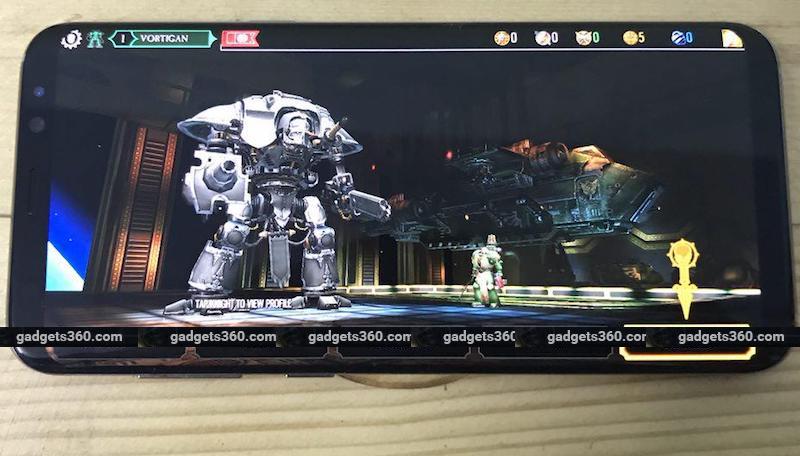 Grand Theft Auto: San Andreas Samsung Galaxy S8 and Galaxy S8+ performance
One of the most popular titles on Google Play, Grand Theft Auto: San Andreas has its own set of options including those for resolution, shadows, and reflections. While the iOS version uses a default setting and does not allow users to tweak these options, Android users can. Now, you’d think that a mobile game released in 2013 would be easy pickings for 2017’s cutting-edge hardware, and that’s where you’d be wrong.

Not only did we have to enable Game Mode and Game Launcher, but we also had to drop to the default settings instead of ramping them up to the maximum, due to the frequent drops in frame rate. The end result? A playable variant of the PS2 classic albeit an imperfect one. If you’re holding off thinking developer Rockstar would update this, think again. The last time Grand Theft Auto: San Andreas was updated for Android was in 2015 and is likely not using the latest APIs, so it’s probably not fair to blame the Galaxy S8 and Galaxy S8+ for the woes.

Are the Galaxy S8 and Galaxy S8+ best for Android gaming?
Barring a few minor hiccups, the Galaxy S8 and Galaxy S8+ delivered consistently great experiences, in part thanks to the Infinity display. Colours are vivid and the near bezel-free design allows for a greater degree of immersion, particularly in Asphalt 8 and Warhammer 40,000: Free Blade. The larger amount of screen real estate means your fingers aren’t going to be cramped for room when playing games with virtual buttons. Heat wasn’t a concern either, with the S8 and S8+ feeling slightly warm at most.

In terms of battery drain, we saw around five percent lost after approximately 15 minutes of gameplay, and this was fairly consistent across games. Keep in mind that this was while we were connected to Wi-Fi, so your mileage may vary when on the go. 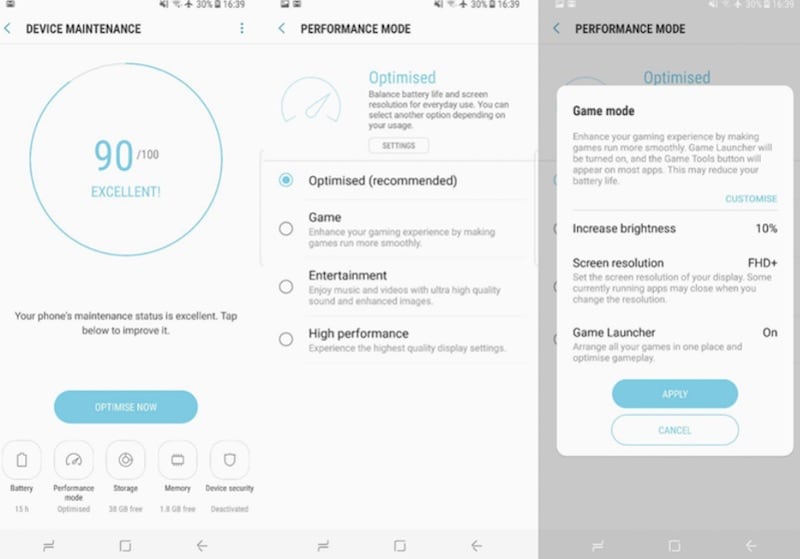 While we found Game Mode, Game Launcher, and Game Tools to be handy additions, we didn’t find the need to use them to make any of the games we tested playable with the exceptions of Breakneck and Grand Theft Auto: San Andreas. In fact, the performance gains we obtained from using them were negligible for the most part, while the trade-off in screen resolution resulted in a less than optimal visual experience.

Nonetheless, with mobile game production values becoming grander and more console-like, we do see the need for such options to ensure a certain amount of future-proofing before Samsung’s next round of flagships.

With several smartphones using Qualcomm’s Snapdragon 835 SoC due shortly it will be interesting to see how they compare to what Samsung has on offer. As it stands, the Samsung Galaxy S8 and Galaxy S8+ launched in India with the company’s Exynos 8895 SoC are solid performers in games, as our tests show.

Apple Stopped Selling The 256 GB iPhone 7 So Customers Will Buy The iPhone 8: That's Not Working Out So Well

Best Android phone 2019: which should you buy?

Winners of Landscape Photographer of the Year 2018 announced

Best Samsung phones 2019: finding the right Galaxy for you

Build yourself a $10 VR headset

BMW's X7 has been tested to the extremes

The Samsung S10 gets a 5G model

Uber safety driver of fatal self-driving crash was watching Hulu, not the road

Apple strikes a deal with MLB to put iPads in dugouts

Samsung Galaxy M30 to Go on Sale Today at 12 Noon via Amazon.in, Samsung Online Shop: Price, Specifications
Google Chrome will soon save you from the web's most annoying video ads