Quake Champions isn’t a sequel to the oft-reviled 2006 first-person shooter Quake 4 – it has more in common with Quake 3: Arena, a multiplayer-only classic from the late 90s. The Quake Champions open beta starts this week, giving you a taste of what to expect. Here’s everything you need to know.

The likes of John Carmack and John Romero aren’t at id Software anymore, but little appears to have changed with the studio, as it stated that release of Quake Champions will happen only “when its done.”

Quake Champions beta platforms
Right now, Quake Champions is slated for the PC. No plans for a PS4 or Xbox One release have been revealed just yet. id has stated in the past that frame rate limitations of console hardware don’t allow for it to launch games on those platforms. Would this change in a world with the PS4 Pro and Xbox Scorpio? Only time will tell. 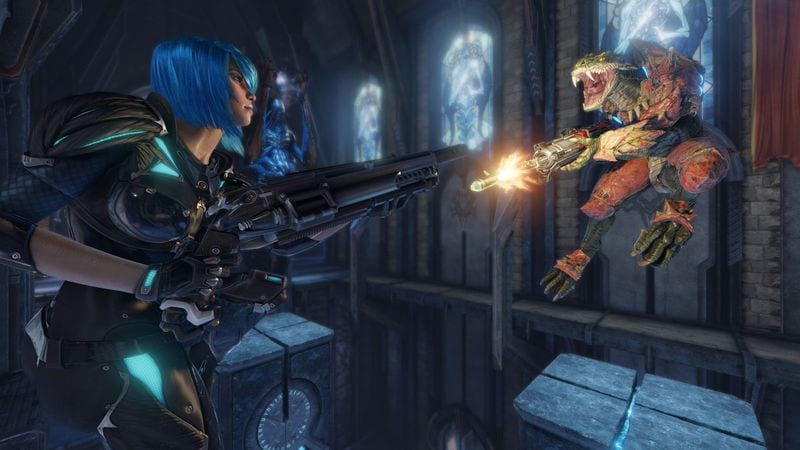 How to get Quake Champions beta
In order to play, you need to register for a key at the official Quake website. On registration you should receive a key immediately, allowing you to download the game via Bethesda Launcher — Bethesda’s download client for the game.

Quake Champions beta modes
A new 4vs.4 mode called Sacrifice will be available during this period. Details are scant other than that it’s designed for those who want different champions to work together with their unique abilities. What are Champions you ask? They’re the different heroes you can play as in Quake Champions, much like in Overwatch or Paladins, two other popular hero shooters.

Quake Champions is free-to-play
Unlike previous Quake games, Quake Champions will be free-to-play when it launches. What this means is players who want to can play a single character named Ranger, for free. Or they can buy the Champion Pack and get unlimited access to Ranger and all his other friends for a fixed price.

“At its core, it’s a free-to-play game,” id’s Creative Director Willits said in an interview: “with the option to buy the Champion Pack and just get in and play with all the Champions. There are a number of Quake players that just want to play their Quake, right? And they are familiar with the business model of our previous games, and they are totally fine. ‘I want to buy the game. I want to start playing. I want to have access to all the Champions.’”

“But then we also understand that we want to get as many people into the game as possible, especially outside of North America and Western Europe, where we have a massive fan base. So we want to have the flexibility to have a free-to-play option for those people.”

The Xbox One S All-Digital Edition – why pay more for less?

Kaspersky Lab: D.C. office ‘no longer viable’ and will close

Modern history: how the heritage business is embracing mobile tech

iZettle makes it easier than ever to start an online store

The most hilariously awful volume controls ever

Google Home vs Amazon Echo: Which Smart Speaker Is Smarter And Which Should You Buy?

Wilder vs Fury 2 live stream: how to watch the boxing rematch from anywhere

Women of color at tech companies are few and far between