Pyre Developer on Design Choices, Local Multiplayer, and the Lack of a Game Over Screen

“It’s our biggest game, with more characters and more ways to play than either of our previous games,” Greg Kasavin, creative director at Supergiant Games, tells Gadgets 360. “We didn’t set out to make a bigger game for the sake of it, but the larger cast of characters ended up requiring this, in order for the story to feel fulfilling and complete.”

Kasavin is talking about the studio’s next game – Pyre – which comes out worldwide on July 25 after close to three years in development. It’s a new action role-playing title (that borrows other genre elements) from the same tight-knit core team that gave the world Bastion in 2011, and Transistor in 2014. Together, the two games have sold just about 5 million copies but more importantly, both have been singled out for how beautiful they look, and how engaging they are to play.

A lot of that is thanks to Supergiant’s art director Jen Zee, who has been with the indie studio from the start. For Pyre, as before, she has come up with a distinctive look for the characters, and the game’s high fantasy setting has given her the licence to go wild, which shows in the variety of horns on human heads, or animals standing up on two feet.

Though the influences come from a myriad of sources, Zee says the pen-and-ink works of Italian illustrator Sergio Toppi, and American artist Franklin Booth, were at the forefront in the beginning.

“I just love the look of traditional mediums and bringing them into the games we create,” Zee adds. “[Japanese manga] Saint Seiya was also very much on my mind – the mysterious, masked anonymity of the female saints Marin and Shaina is a really cool idea I’d always wanted to explore. The ritual competitions central to Pyre, with their ceremonial robes and masks, gave me the perfect excuse.” 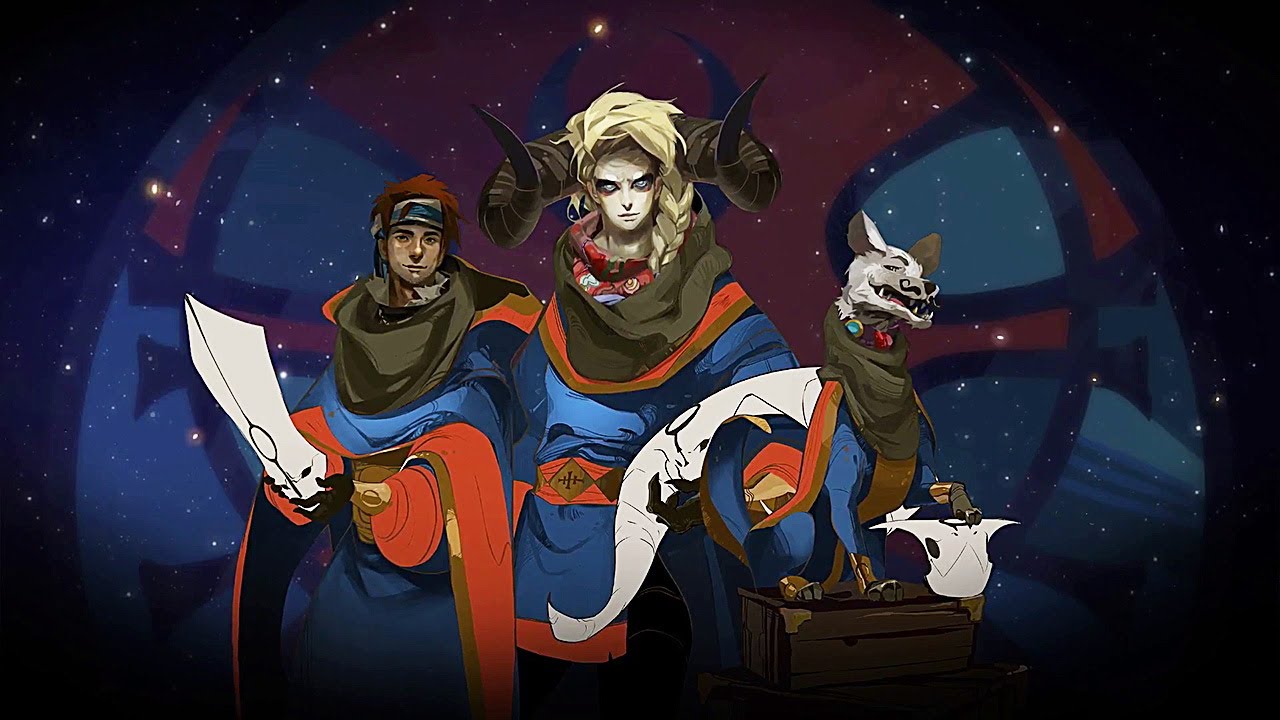 The ritual competitions Zee mentions are the crux of the game’s premise. You start off as an exiled character and upon meeting others like you, you create a party of three. Then you travel the land of purgatory looking to cleanse your souls by defeating other exiles in these competitions.

“The idea of there being this ancient ritual competition in which exiles could earn back their freedom from purgatory was exciting to us,” Kasavin says, who serves as the lead writer for Supergiant. “It implied a situation where your actions could determine who remained in exile and who would go free, whether it’s friend or foe, and for the narrative to react to those outcomes.”

“It also meant that each confrontation against your adversaries in Pyre could feel like a unique battle against a specific character or characters, who would remember the outcome of your last confrontation, so there would never be generic or meaningless action sequences at any point,” he adds. “The possibility of re-encountering foes you might have defeated or been defeated by previously was exciting to us as well.”

Goodbye, game over
With Pyre, Supergiant wanted to make a game that had a big ensemble cast, Kasavin says, where the characters would need to work together to achieve both personal and shared goals. Like its previous games, Pyre’s campaign is restricted to single-player so you’ll be switching back and forth between the three characters during combat. But the storytelling is set apart by the fact that the campaign mode has no game-over state.

“One of the big design challenges we wanted to pursue with Pyre was to have a story where you could never run into a game-over state at any point, within a game that still offered plenty of exciting action and challenge,” he adds. That meant making combat non-lethal, and the process of learning a part of the game, rather than something you do “between restarting levels over and over”. Essentially, Pyre will let you recover from and move past your losses, which Kasavin thinks is crucial to the game’s story. “[It] involves these characters seeking enlightenment, and I think as we all go through life, some of our most eye-opening experiences come from when we learn from our mistakes,” he adds. “Beyond that, we don’t like it in games when, just as you’re getting to the most exciting part of a story, you might get stuck on some really frustrating action sequence. A story where you can never [have] game-over ensures that the pacing will always keep you moving forward, so if you want to get to the end of the story, you just have to keep going.”

The no game-over policy has also resulted in Pyre being “far less linear” than their previous works, Kasavin concedes. “For example, there’s a certain narrative sequence that, by our estimation, has more than 200 million different possible permutations depending on various factors,” he notes, “so we can safely say that no two players will experience exactly the same story when they play through Pyre.”

A new avenue
For the first time, a Supergiant game will have local multiplayer, thanks to a versus mode in Pyre. Kasavin says it came about as they were prototyping the gameplay, and it’s become a “great addition” that should provide a lot more playtime beyond the story.

“Versus Mode lets you play as more than 20 different characters from the campaign,” he adds, “including many you can’t play as in the story, so it’s an exciting extension to the story and has a bunch of additional voiceover and lots of little extras to make it unique.”

Owing to the small team size – just 12 people – Supergiant didn’t want to put resources towards creating an online counterpart. “I think games need to be designed around online play at a foundational level to live up to today’s high standards,” Kasavin remarks. “It’s not something that can easily be added on if it’s not core to the experience. We always knew we were going to focus on the single-player campaign and the story over doing online multiplayer.”

That’s also why Pyre is limited to the PS4 and PC at launch, and Kasavin says that Supergiant will take a decision based on the demand and reaction to the game post release to see if it should come to other platforms, such as the Nintendo Switch, Xbox One, and iOS. Bastion came to life on the Xbox 360 and PC in 2011, then iOS in 2012, arrived on the PS4 almost three years later, and then the Xbox One late last year. Transistor had a near-simultaneous launch on PS4 and PC, then iOS in 2015, but never made the jump to Microsoft’s console.

Kasavin says both Bastion and Transistor took more than a year after launch to reach the App Store “because we put months and months of additional development time into them that we could never have justified as part of the initial launch. We’ve been fortunate to find opportunities to bring our games to more platforms in the past, but it’s something we have to evaluate case by case each time.”

Pyre will release on July 25 for PlayStation 4 and PC via Steam.

We spoke about our expectations from Supergiant Games’ upcoming game Pyre on Transition. You can listen to it via Apple Podcasts or RSS, or just listen to this episode by hitting the play button below.

The Apple Watch Hermès Collection Is Coming To Apple’s Website

Echo Look to dole out fashion advice from Vogue and GQ

Finding Beauty in the Mundane as a Photographer

Guess this Korean Celebrity: Who is this BTS Member That Lost Over $5000 Worth of AirPods?

Razer's crazy gaming prototypes have been stolen from CES booth

To control AI, we need to understand more about humans