Puzzle games, in recent times, have become the domain of mobile platforms. We’ve seen them thrive on the likes of the App Store and Google Play. However the Nintendo Switch, which brings together a console and a portable gaming device, appears to be changing that. Puyo Puyo Tetris is a puzzle game that fuses gameplay mechanics of Tetris with Puyo Puyo. While the former is universally known, the latter is a juggernaut in Japan, but with few outings outside of the country.

Simply put, Puyo Puyo has you matching four or more circular blobs of the same colour – it’s a bit like Candy Crush Saga. They have to be touching each other in a line either vertically or horizontally, and not diagonally as some match-3 puzzlers play out. When they match, they disappear (or pop as the game calls it) off the screen, adding to your points tally. You can chain Puyo together for higher scores that help you win a round.

In Puyo Puyo Tetris, you can compete in Puyo Puyo, Tetris, or both, across a host of game modes. The game actually works quite well resulting in some tense yet amusing encounters, forcing you to quite literally switch between the rules of Tetris and Puyo Puyo on the fly. Having said that, you can also practice against the CPU in Solo Arcade, and there are a number of helpful tutorials for each game mode, to help you get up to speed with this hybrid puzzler. 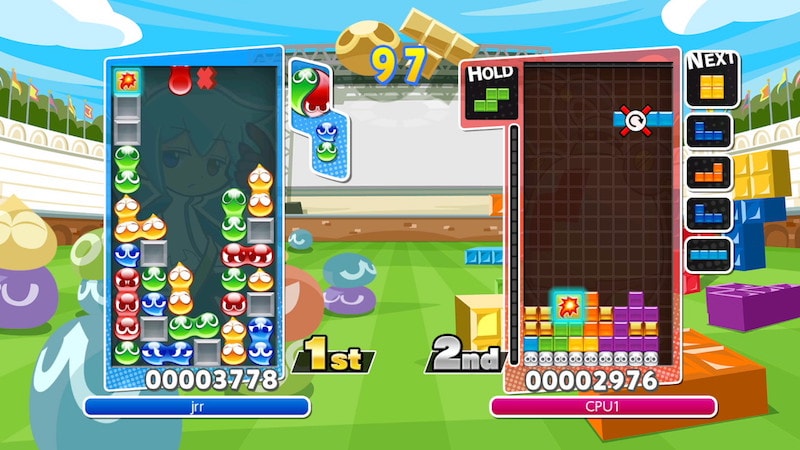 Then there’s the multiplayer component. You can compete in Puyo Puyo or Tetris in versus. Swap mode has you playing both Puyo Puyo and Tetris boards, which switch back and forth at regular intervals, while Fusion is a mode where you’re clearing out Tetris blocks (or Tetriminos as they’re called) and Puyo on the same board. Big Bang mode is a frantic affair wherein you’re tasked with clearing large amounts of blocks and Puyo to defeat the opposition in a battle royale. And finally there’s Party mode where special items can max out your score or impede the progress of the opposition.

For most part, we found all these modes extremely enjoyable. There is little in terms of variance between them, but you’re guaranteed entertainment regardless of what you choose. The colourful presentation, apt music, and easy to understand rules make Puyo Puyo Tetris fun throughout. With that said, if we had to choose one mode as our favourite, it would have to be Adventure mode.

Adventure mode in Puyo Puyo Tetris is a robust single-player experience. While Sega could just throw in an endless mode and multiplayer and call it a day, it has gone above and beyond that. From battling quirky characters to solving time trials, the variety on offer makes it well worth checking out.

Here you’ll square off against characters from the Puyo Puyo series in both Puyo Puyo and Tetris. It’s a welcome addition complete with voice-acting and a ridiculous story that will have you solving one puzzle after another to see what happens next. From a narrative standpoint, it isn’t the greatest plot, but does enough to keep you hooked. 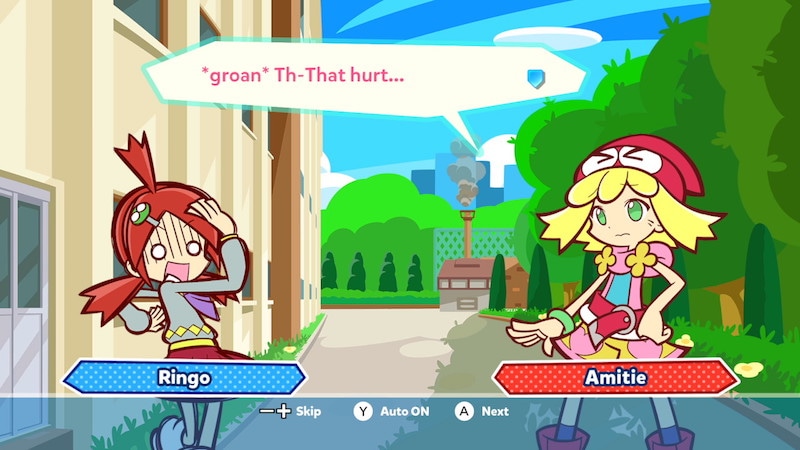 Despite a plethora of modes and suprisingly good gameplay, there is one place where Puyo Puyo Tetris falters. It would’ve been nice to include touchscreen support seeing that the Nintendo Switch does sport a 6.2-inch display. Instead you’re relegated to using the Joy-Cons in gameplay, while you can use the touchscreen only when navigating menus. The ability to use the Switch’s touchscreen to play Puyo Puyo Tetris would be nice.

Furthermore, if you were expecting the game to ease you in to its mechanics while you’re playing any mode that’s not labelled as a tutorial, think again. You will need to go through the tutorials in order to progress through the game’s campaign. It doesn’t help matters that some sections early on are tougher than they should be if you aren’t a seasoned puzzle game fan either. The difficulty curve could be a lot gentler.

As far as puzzle games go, Puyo Puyo Tetris is well worth checking out. It’s a competent entry in the Nintendo Switch’s library. Once you look past some of its quirks, it’s a game that you’ll be playing for hours on end.

Petnet’s smart pet feeder system is back after a week-long outage, but customers are still waiting for answers

Best NAS devices of 2019: top Network Attached Storage for the home and office

Get ready for a new era of personalized entertainment

The best Meeker 2017 Internet Trends slides and what they mean