There isn’t much of a Motocross following in India, but that didn’t stop us from trying MXGP3 — The Official Motocross Videogame. Motocross is essentially a bunch of bikes racing on closed, off-road tracks. The dirt tracks feature several hairpin bends and lots of small inclines and slopes. If you’re expecting high-speed motorcycle racing on flat tracks, you need to check out the MotoGP series of games instead.

As much as we wanted to get into Motocross racing, MXGP3 did a very poor job of getting us interested in the sport. There is no tutorial level to help new players out, and no explanations to help you to get interested in it. There is only one screen full of screenshots and text explanations. This made learning harder than it should’ve been. A series of tutorial levels would’ve been really nice. This is a game built for a niche audience, and one that only Motocross fans will enjoy.

This is made clear by the fact that MXGP3 lacks an arcade mode — where motorcycle physics and advanced controls don’t matter much. This is very much a simulation racing game, and that means that there is a steep learning curve for those who want to play.

That said, if you are willing to invest the time required to learn how to properly race a motorcycle in off-road tracks with some nasty turns, MXGP3 can be quite rewarding.

After a while, we had figured out a few basic things. This is definitely not a high-speed racing game. MXGP3 requires intense concentration — much like actual Motocross racing — and there is a very low margin for error. For instance, on one of the tracks we kept crashing at one point where a hairpin bend appears right after a slope, which is at the end of a long straight. We’d be zipping across the straight at around 100kmph and then find ourselves flying off track, resulting in a crash. Even at the lowest difficulty setting, winning races was quite the challenge initially, as one minor mistake would end up costing us a lot of time. 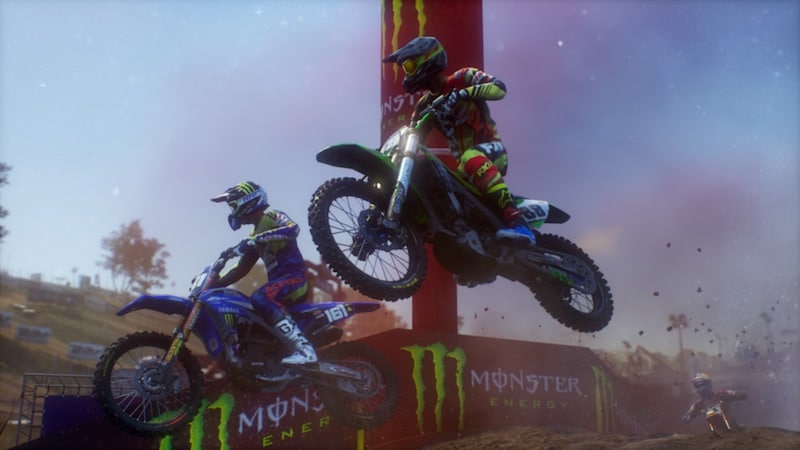 This is exactly why the game rewards you with 50 percent additional credits for a five-lap race, when compared with a three-lap race. Keeping your concentration levels up on twisting tracks is quite the task.

MXGP3 has a lot of tracks and different riders — all official Motocross racers — to choose from. The single-player mode includes a full career, apart from individual races and championships. If you’re a fan of Motocross, there’s a tonne of content here to keep you occupied for hours.

You can also spend time tweaking your motorcycle to suit the track. For instance, you can change the gear ratio to long for tracks with long straights, or make it short for courses with a lot of hairpin bends. Then you can go into more detail, such as tweaking the front and rear suspensions for certain tracks. You can tweak your motorcycle before every race and that’s a great feature because the riding experience changes significantly, and can mean the difference between winning and losing.

While MXGP3 is all gung-ho on realism, the graphics are quite average. The tracks don’t look great and the motorcycle graphics also are a bit dated. On the other hand, there were no noticeable performance issues even with 22 bikes on screen, which is a good thing. There were also a few other elements that made us wonder how realistic the game actually is. A few times we saw the front tire of our bike landing on another rider’s back but he just rode on as if it was a feather and not a heavy motorcycle landing on him. We also saw other bikes’ tyres landing on our rider’s back with no effect. Issues like these were quite surprising to see.

Overall, MXGP3 is a game that will please hardcore Motocross fans who want a simulation racing game. It’s almost hostile towards new players or those who don’t follow Motocross, but if you take the time to learn how to play, then the game does reward you.

To IP or not to IP, that is the question

Apple: Your iPhone 7 may be water-resistant, but try not to get it wet

24 more characters, for better and worse

Electrification not on the table for Porsche's GT cars

FIFA 17 Demo Gives Enthusiasts the Tools to Stand Out

It took 5,000 hours to build this life-size Lego McLaren Senna

PS5 and Next Xbox Specifications and Price Leaked

Google Rolls Out Panic Detection Mode In Android 7.1 Nougat To Protect Users From Malware: How Does It Work?