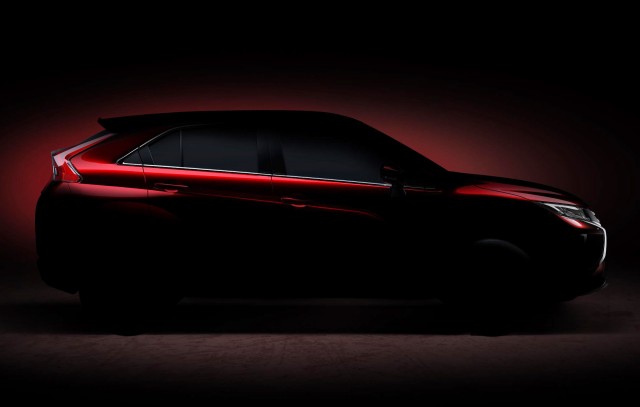 Mitsubishi has inundated us with a series of SUV concepts in recent years. Soon, though, the automaker will unveil an SUV that’s bound for production—an SUV that may end up being the basis for the next Evo.

The automaker will use the 2017 Geneva auto show this March to present an SUV positioned between its Outlander and Outlander Sport. The vehicle is partially revealed in a teaser photo released on Tuesday and is described as being a sporty, coupe-like alternative to the more rugged SUVs currently found in Mitsubishi’s lineup.

No other details were released but the teaser suggests that the SUV features a design previewed by Mitsubishi’s XR-PHEV concept unveiled in 2013. It’s possible that the plug-in hybrid system of the concept also previews one of the powertrains pegged for the vehicle.

Why all the interest in a hybrid SUV from Mitsubishi? Because the vehicle in the teaser resembles a concept the automaker unveiled in 2014 which had the Evolution name tagged on. The concept came complete with S-AWC all-wheel drive, an 8-speed dual-clutch transmission and plug-in hybrid power, suggesting that it may be a preview of the vehicle that will eventually succeed the Lancer Evolution.

We look forward to finding out more at the Geneva auto show, which this year starts on March 7. To learn about some of the other vehicles set to appear, visit our dedicated hub.

GM to Employees: Can I Borrow That Salary?

Christian von Koenigsegg explains how to start a car company

Facebook’s ‘Watch Party’ rolls out to all, letting Groups watch videos together

iPhone XS: The one reason why I'm all in

First Jaguar I-Pace delivered in US

SEAT and Champion Motors create XPLORA, a partnership on technological innovation in Israel

The 11 biggest tech acquisitions of 2016

Apple Watch price cut: save $80 on the Series 3 Apple Watch at Walmart

Facebook will soon bring 3D photos to the news feed

The problems with Facebook are inherent in its design, but that can change

Get started with your new camera: 12 key settings

Apple Will Kill The iPhone X This Year, Analyst Says: Will That Really Happen?

Gift Guide: 13 last-minute gifts that you can still get in time