The Xbox One S has been out for barely a month but that hasn’t stopped Microsoft to announce a Gears of War 4 special edition console. But the sci-fi shooter isn’t the only game getting a new Xbox One S variant. Today the company announced that Battlefield 1 will receive not one, but two limited edition consoles.

First up is the Storm Grey Special Edition console (pictured above). It comes in the aforementioned colour along with a matching controller. It includes Battlefield 1 Standard Edition, a month of EA Access, and a 500GB hard drive. It’s limited to the US only and exclusively at Microsoft Stores and Wal-Mart for $299 (around Rs. 20,000)from November 1.

If you need a higher capacity Special Edition Xbox One S and reside in the US, Canada, Australia, New Zealand, and Europe there’s the Xbox One S Battlefield 1 Special Edition Bundle (1TB), which features a military green console with matching stand and controller, a full-game download of Battlefield 1 Early Enlister Deluxe Edition, the Hellfighter Pack, Red Baron Pack, Lawrence of Arabia Pack, a new visual appearance of the Behemoths, five Battlepacks and one month of EA Access all for $349 (approximately Rs. 23,300). It will be available in the US, Canada, Australia, and New Zealand starting October 18 and in Europe starting October 13. 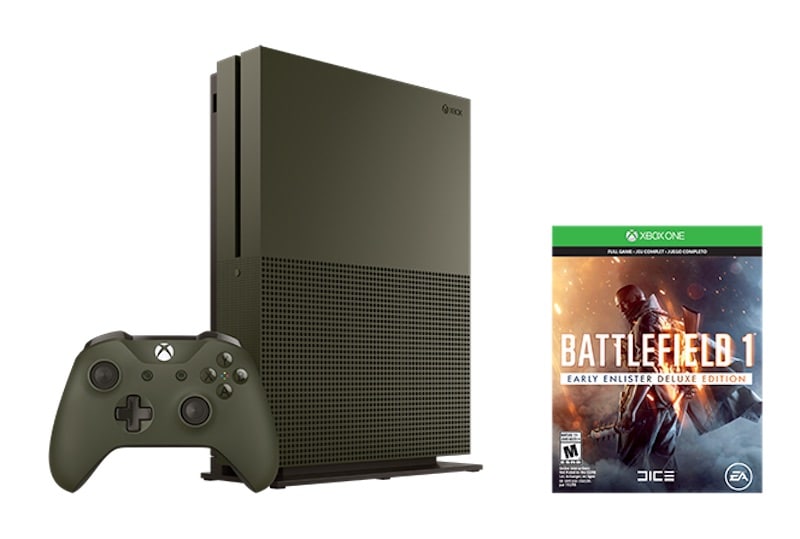 (Also see: Xbox One S Price, Release Date, India Launch, and Everything Else You Need to Know)

And this is not all. There’s a third bundle. It includes a month of EA Access, Battlefield 1 Standard Edition, and the usual white Xbox One S 500GB console for $299 (roughly Rs. 20,000). It will be available in the US, Canada, Australia, and New Zealand from October 21 and in Europe from October 13. Microsoft states that all these consoles come with a digital copy of the game, except those bought at GameStop.

Although the Xbox One S has no release date for India, enterprising independent retailers have managed to procure the 500GB, 1TB, and 2TB standard editions of the console. Starting from Rs. 30,000 it’s a far cry from Microsoft’s official pricing on the original Xbox One that starts at Rs. 34,990. More so when you consider that unlike the Xbox 360, the Xbox One’s hardware is a lot more robust. India has received every Xbox One bundle available internationally such as FIFA 16, Assassin’s Creed, Quantum Break, and even the Forza 6 Limited Edition Xbox One console. While Microsoft India has no plans of launching the Xbox One S in India, we won’t be surprised if it changes its tune in time for these bundles.

Subscribe to Orbital, The Gadgets 360 podcast via iTunes or RSS and just hit the play button below to listen to our iPhone 7 special episode.

This Photographer Shot Portraits from Inside a Pitch Black Camera Box

Tech's leaps, limps and likes: The 7 trends that defined 2017

Spotify Soon to Stream Directly on HomePod; To Set as the Default Music App in iOS 14, too

Next-generation Ford Ranger Raptor reportedly coming to the US

Canon vs Sony: Skin Tones in Portraits and How to Correct Them

Apple improved the 2019 MacBook Pro keyboards after all, iFixit uncovers

Will Gary Jones reform the UAW?