Is it Possible to Photoshop on your iPad? 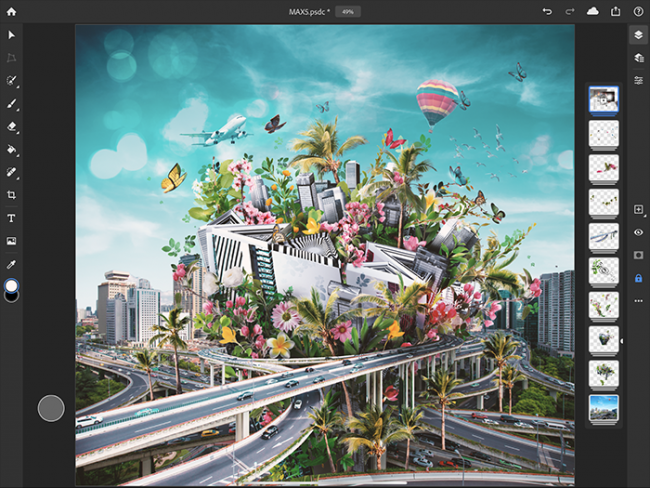 The short answer: yes. Designers can now use Photoshop anywhere, as Adobe announces the debut of the first iPad-compatible version of Photoshop.

In their MAX conference last year, the software company unveiled its plan to bring a full, uncompromised version of the photo-editing app to the iPad. They promised to launch a “full version” of the industry-standard Photoshop as part of their strategy to make their software compatible across multiple devices.

Adobe’s apps are currently available to platforms like Windows, macOS, iOS, and Android. While the desktop versions garnered millions of fans, their counterparts in handheld devices were left behind. The seamless workflow options that the desktop versions of the Adobe apps offer were missing, along with other significant functions.

With the release of Version 1.0 of Photoshop for iPad, however, everything changes.

The released software can open and edit full-size PSD files in all devices. Resulting documents and edits look precisely the same since it uses the same code as the desktop version. It boasts similar editing functions and an interface that makes long-time users of the desktop version familiar with the workspace and the tools.

Due to the limited file managing capability of the iPad, Adobe took advantage of its Creative Cloud. The cloud documents system also went for an upgrade, enabling access to documents across devices without unnecessary file conversions, imports, exports, nor quality loss. Users can still work offline. Their files will be saved on the device until they obtain internet access again.

Since the graphical user interface of Photoshop is quite bulky, the iPad version uses content-aware UI. It drives away the clutter and displays only the essential tools and panes, enabling the artist to focus on their designs.

However, the capabilities for this version of Photoshop on the iPad is limited. Adobe decided to start with its “top workflows, composting, masking and retouching, with more to come.”

It might take a while before the full, uncompromised version of the app is available, but Adobe promises to add more and more functions as time passes. In fact, they already teased the next set of capabilities being added to Version 1.0, including rotate canvas, select subject, refine edges, and more brush options.

Photoshop works with stylus-driven tablets like Wacom Cintiq. So, improving the touch-based input capabilities of Photoshop on the iPad will surely be a breeze for Adobe. However, the software company admits they still have to study how designers use Photoshop in handheld devices to be able to deliver the best pencil and touch screen experience for Photoshop users.

After Photoshop, the company announced that it would bring Illustrator to the iPad too. The launch is set in 2020. Just like in Photoshop, they also plan to make use of Creative Cloud to enable access to Illustrator files across all devices. Interested users can sign up and help with the beta version.

This partnership between Apple and Adobe offers enormous leverage for the competition between tech industry giants. With the release of an iPad-compatible version of Photoshop and the planned release of Illustrator on iPad, Apple is a few steps closer to its goal—making the iPad the best one-stop productivity tool.

NO GEN Z ALLOWED: Apple COVID-19 Screening Tool Excludes Ages Under 18 – Why Is That?
more news from the blog

Vikings vs 49ers live stream: how to watch NFL Divisional Round 2020 playoffs football from anywhere

Amazon unveils the $199 Echo Studio, its answer to the Apple HomePod and Google Home Max

Google launches the fifth and final dev preview of Android Wear 2.0 ahead of February launch

OnePlus is once again misleading customers in India

Toolkit for digital abuse could help victims protect themselves

AI is helping people regain mobility and control over their lives

An inside look at Lenovo’s Data Center Group