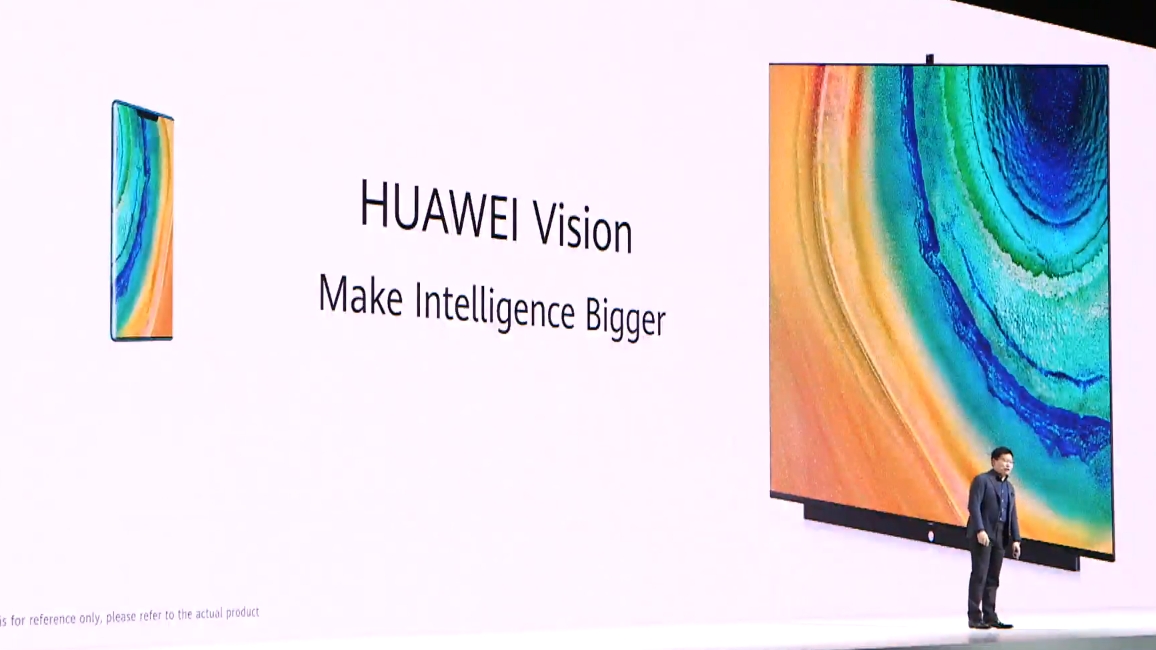 Who isn’t making TV these days? Alongside hype for the upcoming OnePlus TV, phone-maker Huawei has also been getting in on the action with a HarmonyOS TV, the Honor Vision – and it looks like another set called the Huawei Vision is on its way too.

The Huawei Vision is a 4K Ultra HD television, coming in 55-inch, 65-inch, and 75-inch sizes, and was announced at the Huawei Mate 30 launch event on September 19. What’s notable about the set is its HarmonyOS smart platform, which is possibly being touted for the company’s smartphones too, amid certain bans on Huawei phones and wavering support from Google.

Does “Huawei Vision” sound familiar? It could: Huawei released a mid-range smartphone with the same name back in 2011, which you can read in our Huawei Vision smartphone review. But the new Vision TV will be taking some inspiration from the world of phones, with a pop-up camera – also on the Honor Vision Pro – that slides out of the top of the television when you wish to take a photo of, uh, your living room, we guess?

The Huawei Vision will come with IoT Control and Huawei’s HiLink smart home platform to connect to your smart gadgets around the home. Microphones in the remote will also respond to voice commands – we’re told it’s “always listening” – while the remote also uses a USB-C charging port and touch-sensitive controls.

Huawei CEO Richard Yu stated that “it’s more like a large screen smartphone and a smart speaker” than a TV, when he announced it at the Huawei Mate 30 launch event.

There’s no pricing or release date as of yet, but given the Honor TV models have only been announced for the Chinese market so far, we’re not holding out hope of the Huawei Vision coming to the US, UK, or Europe until we hear more.

Apple sale: the Apple Watch 3 gets a massive $150 price cut at Verizon

Samsung May Be Considering Selling Its Printer Business to HP

Beware: 500px Now Sells Your Photos on Fotolia Without Credit

The Fitbit Flex 2 can go in the pool with you

IBM Finds Novel Way Of Storing Data On An Atom

Google Will Introduce Its Own Ad Blocker For Chrome By 2018

Here are some of the new emoji coming to your iPhone in iOS 12.1

RCS, Google’s answer to iMessage, expands to 27 more carriers and OEMs
Startups at the speed of light: Lidar CEOs put their industry in perspective

There might be not two, not three, but four Huawei P40 smartphones coming

Just got Disney Plus? 5 things you need to know

Google Daydream does not work on the Galaxy S8 yet, but SOON!

5 Quick Tips to Instantly Up Your Photo Game