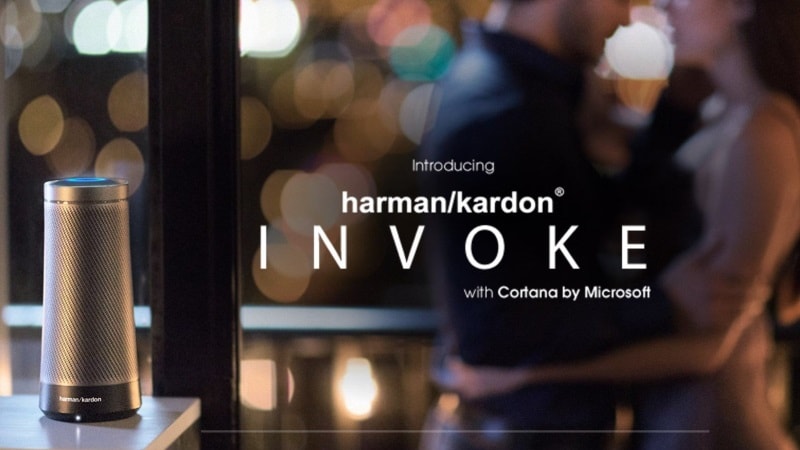 Last year, Microsoft announced the Cortan SDK and Harmon Kardon teased its first Cortana-powered speaker would be launched this year. Now, Harman Kardon has revealed the Invoke speaker. While the speaker website was initially made available for everyone to see, it seems like Harmon Kardon has now pulled down the “coming soon” page for the Amazon Echo’s rival product from its website.

While the Invoke speaker isset to be released by Harmon Kardon in fall this year, around same time as Redstone 3, the pricing and the exact release date has not been revealed as of now, as pointed out in a report by Thurrott.com. The Invoke speakers offer 360-degree sound, ability to make and receive calls via Skype, and other functionalities offered by Cortana that one might expect. Based on the images shared on the pre-release page, the speakers are expected to be made available in Silver and Black colour variants.

In terms of design, the Invoke speakers come in a cylindrical shape and have a circular ring at the top. The Redmond-based company is expected to share more information about the speakers at its Build conference that will start from Wednesday. Microsoft shared last year that the Cortana Devices SDK was then in private preview and would be made available more broadly in 2017.

As we mentioned in our earlier report, Microsoft is not the first tech company to open out its voice assistant technology to third-party developers, with Amazon, Apple, and Google each releasing tools for Alexa, Siri, and Assistant respectively.

This Simple Video is the Perfect CMYK Demo: See Subtractive Color in Action

How Microsoft turns an obsession with detail into micron-optimized keyboards

Samsung Galaxy Note 7's 'Tweaked SoC' Could Be the Cause of Explosions: Report

Facebook Is Planning To Put More Ads In Videos

Facebook will shut down FBX, its desktop ad exchange

These Are the Best iPhone Photos of 2018