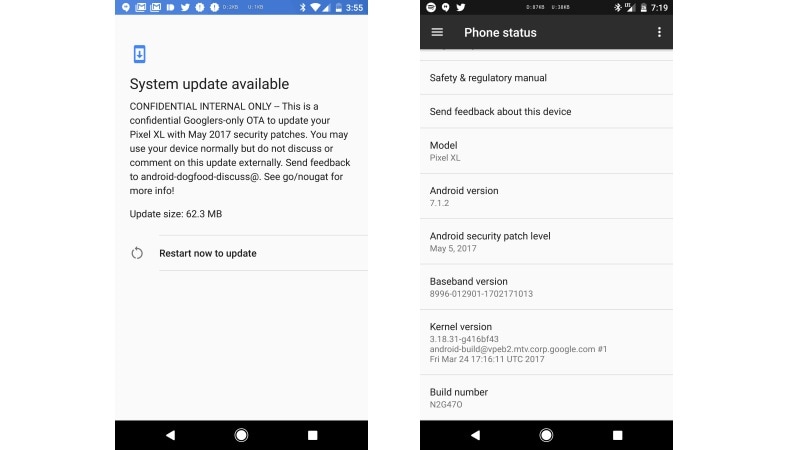 Monthly security updates have become essential for Android devices in the past couple of years as several vulnerabilities are uncovered time and again regarding the platform. Now, in a goof-up from the search giant, the company has reportedly pushed out a dogfood test build of May 2017 security update accidentally to Pixel XL smartphones.

While the dogfood test build of May 2017 security update doesn’t seem to carry any user-visible changes, as pointed out in a report by Android Police, it was not meant to be released to public and was for internal testing – the very definition of ‘dogfood’ in software parlance. In a message along with update, the company said, “This is a confidential Googlers-only OTA to update your Pixel XL with May 2017 security patches. You may use your device normally but do not discuss or comment on this update externally.”

The accidentally pushed out update carries build number of N2G470 and one user informed AP that he received an updated Google Play Store user interface after updating the device, but that is expected to be a server-side change that was flipped coincidentally, as per the report.

Earlier this month, Google rolled out the April Android security update to devices. One of the most critical issues that this security patch fixes is a vulnerability that could enable remote code execution on an affected device through various methods including as email, Web browsing, and MMS when processing media files.

Why now is the time to decommission fingerprint scanners

A DECADE of Innovation; Samsung Marks the Beginning of a New Era

How To Train Your Human: Designing For Healthier Habits

2018 Audi A5 Cabriolet revealed ahead of LA auto show

Hands-On With The Modular LG G5

ATSC 3.0: here’s how to get free over-the-air 4K channels with NextGen TV

Calling the shots: the 12 most exciting cameras of the decade

While the IPO market roars back, venture remains leery

Why Apple’s stock fell off a cliff today

The Bright Flashes During NBA Games You May Never Have Noticed

CES 2018's Big Trend: A Voice Assistant in Every Corner of Your House