More and more pieces of the C8 Chevrolet Corvette puzzle are coming together.

The latest concerns a trademark filing made by General Motors Company [NYSE:GM] for the use of the “LT5” name on automotive engines.

First identified by GM Authority, the filing was made with the United States Patent and Trademark Office on September 19, 2016. It follows an earlier filing made by GM in 2013. 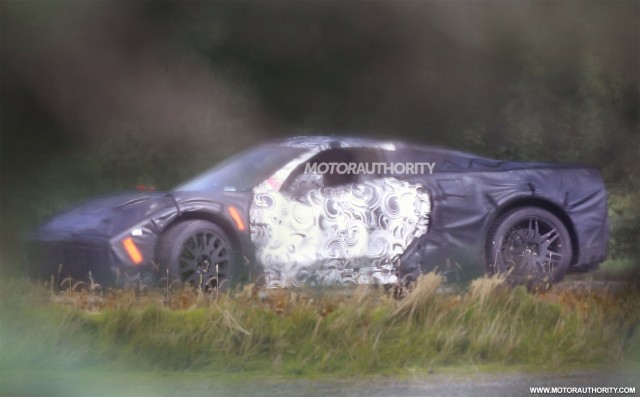 Katech has a long history with GM, including building high-performance engines for Corvette Racing, so it wouldn’t be odd for the Michigan-based company to be helping develop engines for the C8 Corvette.

But what exactly is the LT5? While we can’t be sure, the name hints at the next-stage of performance for the current LT family of small-block V-8s from GM. The LT4 is a supercharged 6.2-liter V-8 delivering as much as 650 horsepower and 650 pound-feet of torque. We’d expect the LT5 to be delivering even higher numbers.

The C8 Corvette is expected to make its debut at the 2018 Detroit auto show, as a 2019 model. Prototypes suggest the car will feature a mid-engine layout, a first for a production Corvette. We’ve also heard that the car may skip a manual transmission.

Before the arrival of the C8, though, GM will launch a C7 Corvette more potent than the current Z06 model, and this could be the model to debut the LT5. The car has also been spied and is expected to revive the ZR1 name. It should make its debut at the 2017 Detroit auto show next January.

Lamborghini boss to take over Formula One CEO role

Amazon Prime Day in Australia: What to expect during Prime Day 2019

Open Bionics partners with NHS for a feasibility study to bring bionic hands to the U.K. health system

Microsoft Might Be Developing Its Own Take On The Chromebook, Leaked Doc Suggests

Vikings vs 49ers live stream: how to watch NFL Divisional Round 2020 playoffs football from anywhere

Ashes 2019 live stream: how to watch the last England vs Australia cricket Test from anywhere

You can now drive a classic Ferrari at Fiorano

The LG G6’s Wallpaper is Actually a Photo

Tech companies should probably come out against a Muslim registry now

The iPhone X Can Keep Up With The MacBook Pro, Thanks To The A11 Bionic Chip

I tried to photograph the apocalypse, but my iPhone wouldn't let me

Amazon will refund millions of unauthorized in-app purchases made by kids
Amazon Echo Show now available in India at Rs 22,999

Make your own phone with MakerPhone (some soldering required)

Is it time we started living underground?