Shortly after Intel announced the first of its 8th gen core CPUs back in August, AMD unveiled its new Ryzen Mobile series. Thanks to both companies increasing core counts across various product lines, we’re seeing big performance improvements over last year’s laptops. Intel’s dominance in this space is being challenged for the first time in years.

With just four models out right now, these new CPUs are built using AMD’s ‘Zen’ CPU cores and feature integrated graphics based on the recently launched Vega architecture. Intel’s new 8th gen CPUs have proven to have strong compute performance, but integrated graphics has never been the company’s strong suit, especially when it comes to gaming. This is the main area in which AMD hopes to have the upper hand. There are a couple of laptops already in the market with AMD CPUs, and today, we’ll be reviewing one from Dell’s recently launched Inspiron 15 5575 series.

This series is currently available with Ryzen 3 and Ryzen 5 CPUs, and you have various options in terms of colours, display resolutions, and RAM. Our review unit today is the top-end SKU in the series, according to Dell India’s website. It features an AMD Ryzen 5 CPU and is priced at Rs. 50,690. Let’s see if AMD’s technology has the chops to challenge the Intel stronghold. 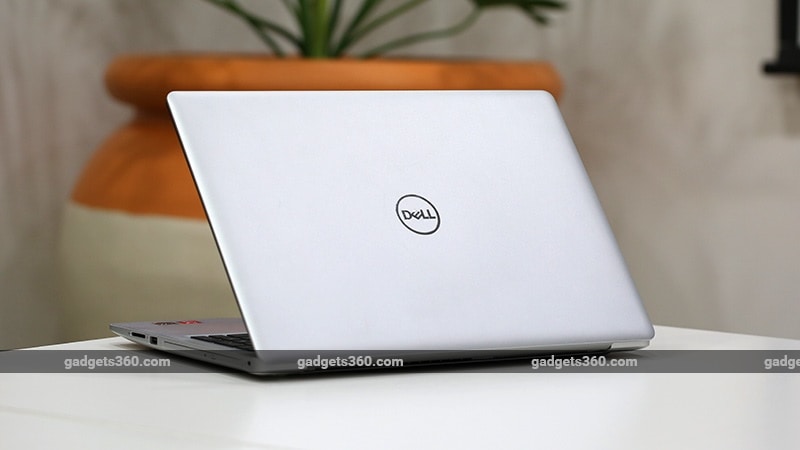 The Inspiron 15 5575 is a pretty basic-looking laptop. Dell has given the plastic parts a metallic finish but once you hold it, it’s easy to tell that it’s not real aluminium. The build quality is quite solid though, and the body of the laptop doesn’t flex easily even if you apply pressure. It feels as though it will be durable enough for long-term usage. On its website, Dell advertises a host of different colour options for the 5575, but at the time of this review, our particular variant was only on sale in a Licorice Black trim. The silver unit that we received doesn’t look bad, but it does seem a bit bland.

The lid offers good protection to the 15.6-inch LCD screen. The resolution is decently high at 1920×1080, and the edges of text and icons don’t appear overly jagged. There’s also an anti-glare coating so reflections aren’t much of an issue. However, the panel used here is clearly not IPS quality, and so viewing angles are poor, and colours are dull. The brightness is sufficient, but at full brightness, whites tend to burn out easily when not viewed head-on. You also get a thick, old-fashioned bezel all around the screen, and a HD webcam in the usual spot. 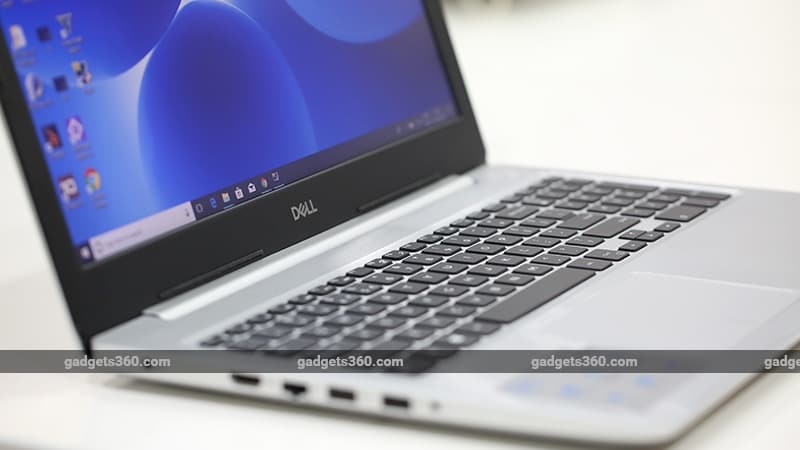 You get a single hinge in the middle of the display, which also conceals all the vents. This laptop is quite thick, and even with the lid open, the base alone measures 22.7mm in thickness. In order to give it an illusion of slimness, Dell has tapered the sides and front of the laptop a bit.

Connectivity is good, and includes two USB 3.0 and one USB 2.0 ports, HDMI, Ethernet, an SD card slot, a microphone and headphones combo socket, and a DVD writer, which is something we haven’t seen in a long time. There’s only one LED indicator near the power inlet, which glows white when you’re plugged in and amber when the battery is low. What’s missing here is a USB Type-C port.

The palm rest and trackpad are quite spacious, and Dell has managed to fit in a full-sized keyboard complete with a number pad. The chiclet keys are well spaced but aren’t backlit, and we didn’t find the tactile response to be very good either. They’re also quite noisy. The direction keys are nicely separated from the others, and the power button is isolated above the keyboard to avoid accidental presses. However, there’s no fingerprint sensor, even with this top-end configuration. The surface of the trackpad isn’t the smoothest. We found tracking to be a little jumpy at times and gestures don’t always work flawlessly.

On the bottom, you have four rubber feet to help get some clearance. The stereo speakers are also placed at the bottom, towards the front. There’s no hatch for accessing any of the components and the battery isn’t removable either. Overall, the Inspiron 15 5575 isn’t much to look at. It’s built to be utilitarian, and that seems to be the end of it. This laptop isn’t very light either, at 2.5kg, so carrying it around every day won’t be very pleasant.

As we stated earlier, the Inspiron 15 5575 model that we have is powered by a Ryzen 5 2500U CPU, which features four multi-threaded cores, giving you a total of eight threads. The base clock is set at 2GHz but that can be boosted to 3.6GHz, depending on the task at hand. Graphics duties are handled by the integrated Radeon Vega 8 GPU, which has eight compute units and a base clock of 1,100MHz. It also supports AMD’s FreeSync variable refresh rate scheme, when connected to a compatible monitor. 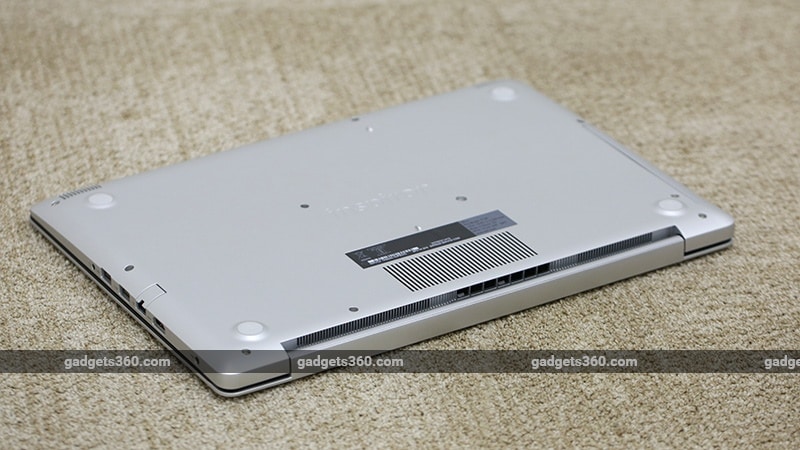 The laptop has 8GB of DDR4 RAM running in dual-channel mode, a 1TB (5400rpm) hard drive, dual band 802.11ac Wi-Fi, Bluetooth 4.1, and a 42WHr battery. You get Windows 10 Home preinstalled, along with Microsoft Office 2016 Home and Student Edition and a 30-day trial of McAfee LiveSafe. Dell also bundles its own software like Dell Recovery Environment, Support Assist, and Dell Mobile Connect. The latter lets you sync your phone to your laptop using Bluetooth, so you can receive calls and check SMS messages directly from your laptop, just like we first saw on the Dell XPS 13 9370.

From the moment you power it on, this laptop doesn’t seem very responsive. This impression persisted with us even days after we set it up. This is most likely because of the slow mechanical hard drive being used. There’s an inherent sense of lag when loading apps or even opening new Windows dialogue boxes. Once your programs are loaded though, things are a bit smoother and even multitasking is quick.

The Inspiron 15 5575 runs slightly warm. After about an hour of streaming video using Chrome on battery power, we found that the bottom and the area behind the keyboard got rather warm. Thankfully, this didn’t spread to the palm rest area, and the keys and other parts of the laptop stayed cool.

In terms of performance, the Rzyen 5 2500U is best compared to Intel’s new Core i5-8250U. The Ryzen 5 pulled ahead of Intel’s offering in some synthetic tests. In 3DMark Fire Strike, the Inspiron 15 5575 scored 1,639 points, which is roughly 600-700 points more than what a Core i5-8250U laptop would typically achieve. In CPU benchmarks, we’ve seen slightly better results from Intel, both for single and multi-threaded tests. Our real-world file compression and video encoding tests showed that the Ryzen 5 doesn’t quite match the speed of Intel’s counterpart, taking up to a whole minute extra when compressing files and encoding videos.

In games, the integrated Vega8 GPU is an advantage over Intel’s integrated solution. In Rise of The Tomb Raider’s in-built benchmark, we typically get a single-digit with Intel’s Core i5 offerings, with the resolution set to 1080p and the ‘Low’ graphics preset. The Inspiron 15 5575 on the other hand returned 15.7fps with the same settings. The laptop doesn’t get too hot when gaming, which is something we liked. The exhaust fans are audible but they’re not too distracting.

Games downloaded from the Windows store, such as Asphalt 8, ran smoothly. We also tried FarCry 4, which gave us a semi-playable average framerate of 20fps, but only after dropping the resolution to 1600×900 and the graphics to the ‘Low’ preset. We managed to get GTA V running too, and we averaged around 27fps. However, we had to drop the resolution all the way down to 1280×720, with most of the graphics settings either at ’Normal’ or turned off. Finally, we were able to get a smooth 30+ frames per second in DOTA 2 at the native resolution, and with the graphics slider pushed all the way to the right for best quality.

The Dell Inspiron 15 5575 has no trouble playing 4K video files, although it’s hard to truly enjoy media due to the lacklustre display. Audio quality is decent but not great. Even with the MaxxAudioPro enhancement, audio sounds a bit hollow. On the bright side, the volume level gets quite loud.

Battery life is disappointing, as the 3-cell battery only managed to deliver about four hours of runtime on a single charge. This was with light to medium usage, which typically involved using Chrome and watching videos. In Battery Eater Pro, the laptop ran for just 1 hour, 36 minutes, which isn’t great either.

Verdict
The Inspiron 15 5575 series is currently Dell’s only lineup with AMD Ryzen CPUs. The onboard Vega 8 GPU performs quite well for an integrated graphics processor, but is still no replacement for a high-end discrete one. The most expensive variant that we reviewed doesn’t quite suit its Rs. 50,690 asking price, as the overall package leaves a lot to be desired. Windows 10 feels laggy, the display has weak viewing angles and dull colours, battery life is disappointing, and this laptop tends to run warm even on battery power.

The Vega 8 graphics do give AMD an edge over Intel’s integrated solution in most 3D games, but if that’s all you’re after, then Acer’s Swift 3 with this very same configuration, looks a lot better at an online price of roughly Rs. 43,000. You lose out on the DVD drive and Ethernet port (which aren’t a huge loss for many people), but in place of that, you do get a Type-C port, backlit keyboard, and a fingerprint sensor.

If you’re looking for better gaming performance but don’t have the budget for a high-end laptop, then something like the Acer Aspire 5 A515-51G with an entry-level discrete GPU is still a better bet at the same price level as the Inspiron 15 5575. When we reviewed it, this model with the Nvidia MX150 GPU featured just 4GB of RAM, which was our main gripe, but it seems like there’s now an 8GB RAM option, available for roughly the same price as the Inspiron 15 5575.

The Dell Inspiron 15 5575 is built well, but other than this, it’s hard to think of a good enough reason to buy or recommend it.

Vodafone and Google Promoted Made in India Android Games: This Is What Happened Next

Instagram’s app-based 2FA is live now, here’s how to turn it on

The best Xbox One deals in October 2016

Pro Photographers with Amateur Gear vs. an Amateur with Pro Gear

Why Apple’s stock fell off a cliff today

Nikon D850 Has Same Image Quality at Double the ISO as the D810: Report