Thanks to the power of social media, it only took a weekend for photographer Antoine Tissier to track down a couple he happened to photograph while out shooting a sunset in Lincoln Park, Chicago.

According to a story posted to NBC Chicago, Tissier was flying his drone just trying to capture the sunset when he happened upon two people standing under the Ulysses S. Grant monument. He said that about 20 minutes before sunset, he saw the couple moving towards the area with another photographer. He quickly captured the photo, landed his drone, and tried to catch up with them.

But by the time he got to the monument, the couple was already gone.

Since he could not find them to share the image he took, Tissier intended to delete the photo when he arrived home, but his friends insisted he share the photo online and try to find the couple.

The image was shared to Tissier’s Instagram, a few Chicago Facebook groups, and the story aired on WGN 9 News Chicago. Just three days later, the couple was located.

“To be honest I never believed we could find them,” Tissier said. “They could even be tourists from anywhere else in the US or the world, and maybe they were already back into their plane the next day when I posted it online.”

Lucky for the couple, Emily and Omar, they were local. The on-the-ground photographer, Crane’s Photography, has shared his perspective of that same moment on his Instagram:

“It was so gorgeous and we couldn’t believe our luck that someone else with a drone happened to be in the same spot as us to capture that photo,” Emily said. “It’s super cool that we were able to get in contact with the photographer though, now we’ll have two awesome photos from that day from two completely different perspectives!” 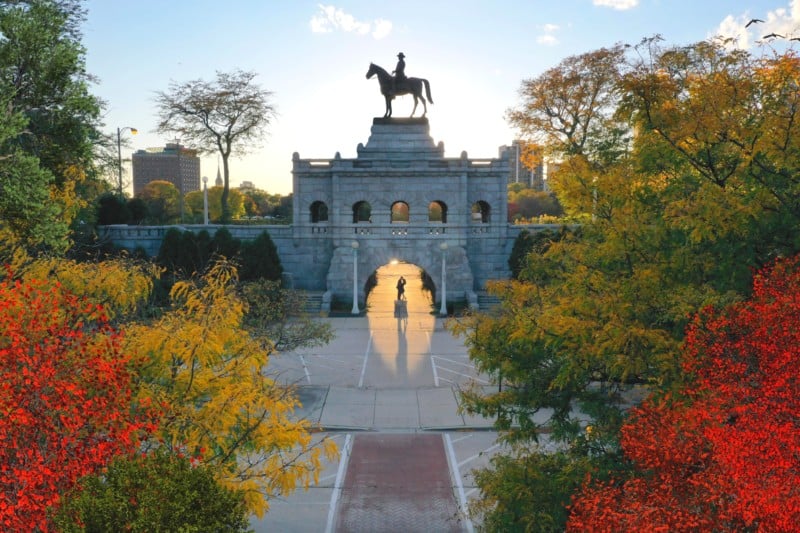 $44M-funded Omni pivots from storage to rentals via retailers

See the C8 Corvette at 2019 Concours d'Elegance of America

How to Memorize the F-Stop Scale With Simple Math

How to buy a monitor: what to look for to get the best monitor (and price) for you

Remember The Controversial Lily Drone? It's Back, But It Should Have Stayed Buried

This Photographer Deals with Anxiety by Creating Surreal Self-Portraits

How to get the best Gear VR experience from your phone

Just how bad were those iPhone sales?

Here's how to tell your fortune with autocorrect

The A to Z of Photography: Exposure compensation

Did Tata just buy a $900M stake in Faraday Future?

The secret to avoiding CES cynicism is never really going