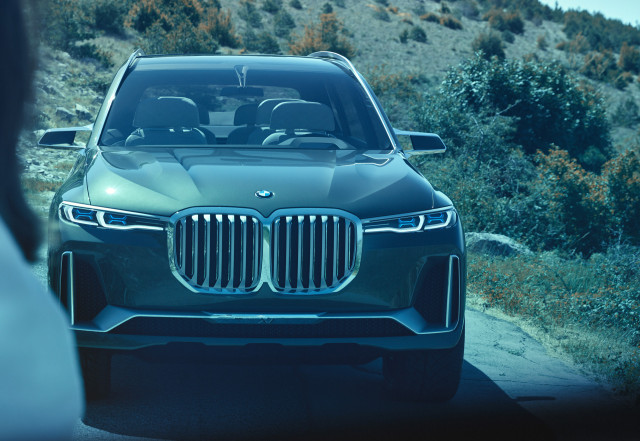 BMW showed the X7 iPerformance concept at this year Frankfurt motor show, previewing the brand’s all-new three-row X7 SUV. However, the concept could birth a second derivative in the form of an ultra-luxurious X8 with a coupe-like design.

BMW’s head of development, Klaus Fröhlich, didn’t confirm plans for an X8 SUV in an Autocar report published on Wednesday, but he did say the strategy worked in the past. Fröhlich was a main force behind using the X5 to create the X6 SUV, which he noted.

“The sector is growing fast, so there will be opportunity,” he said. “It is early to talk about X8, but one of the first decisions I made when I worked on product strategy was to take the X5 and make the X6.” He also added there would be room for an X8 within BMW’s lineup, especially in China.

An X8 would rival other luxury SUVs like the forthcoming Audi Q8 and Land Rover Range Rover.

The biggest hurdles surrounding an X8 are its platform and packaging. According to the report, the X8 could take the form of an X7 coupe or a long-wheelbase version of the same SUV with additional rear-seat space and a sweeping roofline. One thing is fairly certain: BMW would pack content and opulent materials into the rear row of seats since most customers would likely employ a chauffeur for driving duties. Its overall packaging and roofline would be very dependent on design; the X8 would require a unique character while ensuring optimal headroom for rear-seat passengers.

As for the platform, a long-wheelbase version could complicate the choice of architecture. Autocar’s report suggests a mix of BMW’s new CLAR platform, which the X7 will utilize, and Rolls-Royce’s aluminum structure could be a solution.

We expect the BMW X7 to arrive as a 2019 model, which would likely push an X8 into the next decade.

G Suite vs Office 365: which is better for students?

Licensed or Not? A Closer Look at the Fox News Flood Imagery Fiasco

Updated: The 26 best indie games on PC and consoles

From bots to your brain: Facebook's vision for the future comes into focus

Give your friends a reason to snap with Snapchat's custom stories

Microsoft will integrate Azure Stack with Azure Government this year

Photos of Giant Solar Power Mirrors in the Nevada Desert

Facebook is unlikely to succeed in China, even if it compromises on free speech

Samsung’s latest gaming monitors are all about quickness and curves

NASA rockets could soon be branded by private companies

Apple could be announcing a new cheap iPad