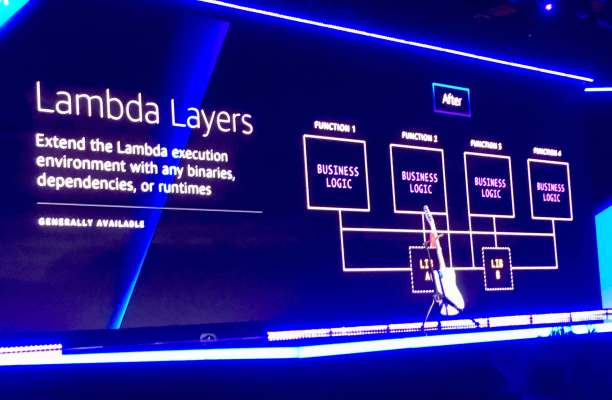 AWS launched Lambda in 2015 and with it helped popularize serverless computing. You simply write code (event triggers) and AWS deals with whatever compute, memory and storage you need to make that work. Today at AWS re:Invent in Las Vegas, the company announced several new features to make it more developer friendly, while acknowledging that even while serverless reduced complexity, it still requires more sophisticated tools as it matures.

It’s called serverless because you don’t have to worry about the underlying servers. The cloud vendors take care of all that for you, serving whatever resources you need to run your event and no more. It means you no longer have to worry about coding for all your infrastructure and you only pay for the computing you need at any given moment to make the application work.

The way AWS works is that it tends to release something, then builds more functionality on top of a base service as it sees increasing requirements as customers use it. As Amazon CTO Werner Vogels pointed out in his keynote on Thursday, developers debate about tools and everyone has their own idea of what tools they bring to the task every day.

For starters, they decided to please the language folks introducing support for new languages. Those developers who use Ruby can now use Ruby Support for AWS Lambda. “Now it’s possible to write Lambda functions as idiomatic Ruby code, and run them on AWS. The AWS SDK for Ruby is included in the Lambda execution environment by default,” Chris Munns from AWS wrote in a blog post introducing the new language support.

For folks who have different tastes in IDEs (integrated development environments), AWS announced Lambda support for several popular ones including PyCharm and IntelliJ in preview and Visual Studio.

AWS didn’t want to stop with languages though. They also recognize that even though Lambda (and serverless in general) is designed to remove a level of complexity for developers, that doesn’t mean that all serverless applications consist of simple event triggers. As developers build more sophisticated serverless apps, they have to bring in system components and compose multiple pieces together, as Vogels explained in his keynote today.

To address this requirement, the company introduced Lambda Layers, which they describe as “a way to centrally manage code and data that is shared across multiple functions.” This could be custom code used by multiple functions or a way to share code used to simplify business logic.

As Lambda matures, developer requirements growl; these announcements and others are part of trying to meet those needs.

Snapchat's Universal Search is everything we ever wanted

Apple iPhones May Face Import Bans In The United States

"The Batman" Batmobile is a mid-engine muscle car

5 Projects to Push Your iPhone Camera to its Limits

This is what Android fans envy most in the iPhone

StarCraft: Remastered will let you fight the 4K swarm in August

Hits, misses, and holds from the 2016 LA auto show

Best TED Talks: 10 inspirational speeches you absolutely have to hear

As eSports popularity explodes, betting needs to be regulated

Amazon unveils the $230 Echo Show, with a screen for calls, shipping June 28

Nameplate From the Past Returns in Trademark Filings

Google gets into the whiteboard business

The CEO behind this clever life-saving fire detector is willing to sell to Apple, Google or Amazon

This Aventador replica has a retractable hardtop and motorcycle power