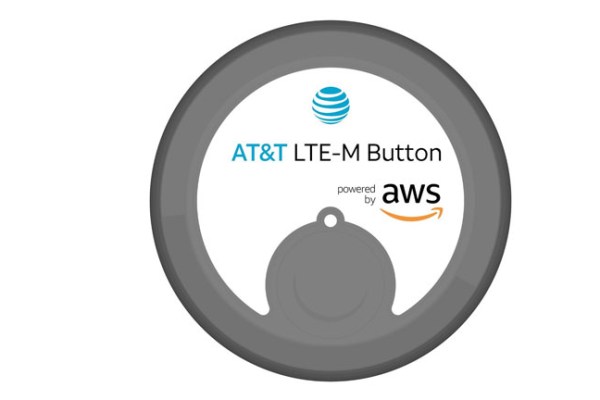 When we first told you about AT&T’s LTE-M Button, the information was socked away in a deluge of AWS Re:Invent announcements. The telecom giant was a bit more upfront when announcing its availability earlier this week — but just a bit.

After all, it’s not a direct-to-consumer device. Unlike the product-branded hunk of plastic you can presently pick up from Amazon to refresh your supply of Goldfish crackers and Tide Pods, this one’s currently open to developers at companies looking to build their own. What it does have going for it, however, is LTE-M, a cheaper, lower-cost version of 4G that’s set to power a future generation of IoT devices.

That means it can be used for your standard Dash-like activities — letting customers replenish items with a press — and it also can be implemented in some more interesting scenarios, out of the bounds of regular Wi-Fi. AT&T offers up a couple of use cases, including customer feedback in public venues and use in places like construction sites where home/office Wi-Fi isn’t an option.

Of course, without the direct retail feedback loop, it’s not really a Dash competitor — and besides, AWS is helping power the thing, so Amazon’s still getting a kickback here. Oh, and then there’s the price — the buttons start at $30 apiece, which amounts to a lot of Tide Pods. As such, we likely won’t see them take off too quickly, but they do provide an interesting usage as AT&T looks to LTE-M to push IoT outside of the home.

JioMart, the e-commerce venture from India’s richest man, launches in 200 cities and towns

Be A Bug Bounty Hunter: Google Is Offering Up To $200,000 For Android Exploits

What happens when you dump the App Store?

Volkswagen 'misused' me, Schmidt tells judge ahead of sentencing

How to back up your PC

Get a lifetime of tech training for $89

Audi's Q3 is hitting its stride

Samsung Pay Launches In The U.S.

At GM: 'An engineer in a designer's body'

Lotus electric hypercar to be called the Evija?