Do you use Eneloop Pro rechargeable batteries in your photo equipment? You may be able to get the same performance at a much lower cost. This interesting 7-minute video from Matthew Eargle of AirborneSurfer looks into whether these relatively expensive batteries ($20 per pack of 4) are actually identical to the much cheaper IKEA LADDA batteries that cost just $5 per pack of 4.

Noticing that all of these rechargeable batteries are made in Japan, Eargle guess that there must be some overlap in the supply chain. There’s probably not that many battery factories pumping out different batteries for all sorts of different companies, and instead it is more likely that there is one factory that white labels its batteries for companies to slap their names onto.

The original Eneloops were made in Takasaki, Japan. The factory and Eneloop were owned by Sanyo, but Panasonic later bought the brand in 2009. Fujitsu, on the other hand, currently owns the factory. This single factory is the only one capable of producing these low self-discharge nickel-metal hydride batteries, and it supplies many brands such as Amazon, Fujitsu, Panasonic, and… IKEA. 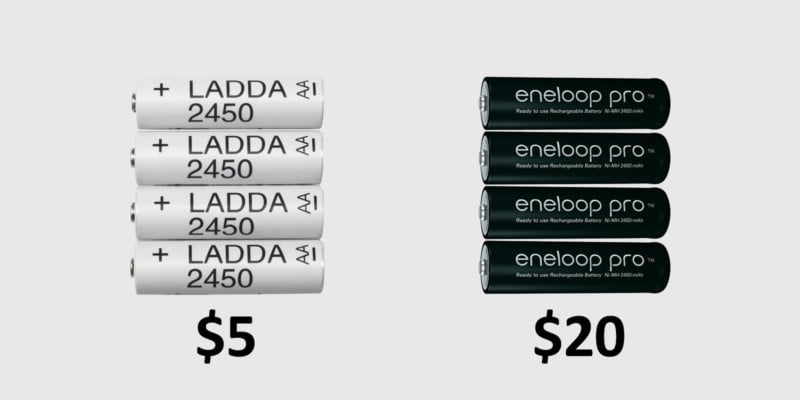 Overall, Eargle found a difference of less than 0.05% between the two batteries. Statistically speaking, they are extremely likely to be the same battery based on these tests, he concludes.

So when you find yourself needing more rechargeable batteries for your gear, keep in mind that spending more money might not actually get you a better product.

(via AirborneSurfer via SLR Lounge)

Microsoft hints at wireless Xbox VR, but won't show it at E3 2017

Car2go puts safety in the hands of humans

Siri Shortcuts can be abused for extortion demands, malware propagation

Power Loss on the Way for GM’s Best-selling CUV

The Simple USB Adapter That Could Change Your Life

Google and VW will use quantum computers to develop battery, self-driving technology

UPS Shows Off Delivery Truck That Can Launch Packages Via Drones

From the Editor's Desk: Android trends for 2017

Microsoft Wants To Teach Developers How To Code For Quantum Computers