An Interview with Jarob Ortiz, the New ‘Ansel Adams’ of the National Parks 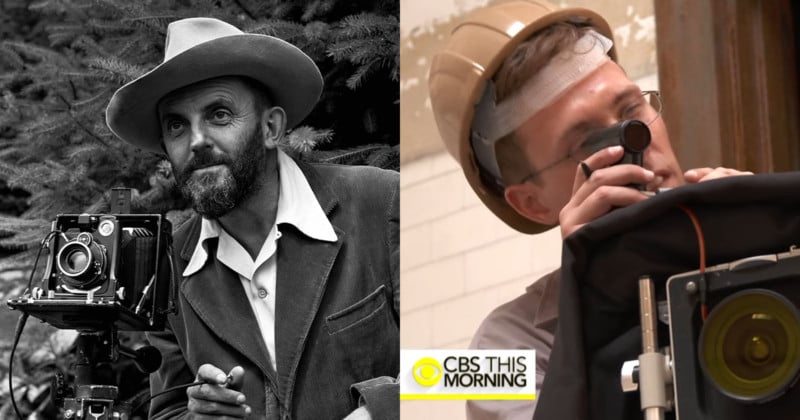 In December of 2015, news broke that grabbed the attention of every photographer: the “Ansel Adams Job Opening” in the US Government. This is considered to be the dream job of just about every photographer. Four thousand applications were submitted, but only nineteen were qualified for the first round of interviews. However, only one could have the job. That lucky person is Jarob Ortiz.

When I messaged Jarob about coming onto my show, Studio C-41, I honestly didn’t think I had a shot. But when he replied that he was interested, I shot out of my chair. I had so many questions to ask: what is his process? What do you do as “Ansel Adams”?

I started the interview as simple as possible. “Tell me about yourself,” and “How did you get into photography?” Like many photographers introduced to film, it all started with a slide. Looking through a light source, he saw all of those colors come from that positive. His desire to “…know everything about this.”, started him down a path where he soaked up every bit of information about film photography.

At one point in his journey, a job opportunity in California fell through due to The Great Recession. He’d sold everything he owned to get out to California and was completely down on his luck, but managed to develop two rolls of film per week at local drugstores.

As we talk, Jarob tells me how he got into large format. He developed an interest in architectural photography and can trace back his inspiration to a single photo. A photo that is famous among photographers and non-photographers alike. The Grand Tetons and Snake River shot by Ansel Adams.

That famous image, as well as the Tunnel View at Yosemite, were my introductions to Ansel Adams. I made that trip to the Grand Tetons and took a 4×5 image myself. It was one of the most transformative moments in my photography career.

Jarob found out about the job opening through Facebook. However, he was unsure at first until friends urged him to apply. Jarob knew that if he didn’t apply for it, he would regret the wasted opportunity. He painstakingly crafted the perfect resume and submitted it. Several months went by and he began to think, “Gee, I wonder who got the job.” It wasn’t until an email, coming in at 1:30 in the morning, saying he was qualified for the position and to submit his availability for a phone interview, that Jarob believed he had a shot.

From day one, Jarob hit the ground running. Architects came to him as he was walking through the door ready to go shoot. He didn’t have a chance to inventory his systems or check on the status of the darkroom, which hadn’t been used in nearly three years.

We learned a lot about his process. While the goal of his work is to document architecture through the use of photography, he does find that he has artistic freedom with his imagery. It is incredibly important that his images are perfectly exposed; never leaving out a single detail to the shadows. He has to get everything in the image within 5-stops, zones 3-8. He accomplishes that through a spot meter and calculating the required light through a set of strobes to give detail in those darkest points of his images.

Deeper into the interview, we talk more about his gear. He works primarily with a 5×7 Canham Camera and a series of Schneider-Kreuznach and Nikon lenses designed for 8×10 cameras. He shoots primarily with Ilford FP4 sheet film for black and white, and, while it’s still available, Fujifilm Velvia 100 and Provia 100F for his 4×5 color work. While it is most notable for its archival capabilities, new factors hinder the sustainability of using film to archive his work:

First, the Library of Congress has assured that digital imagery can be preserved and adequately archived. Second, the E6 process is dying. Fujifilm is the only supplier for large format slide film.

As a result, the National Park Service is preparing to move into digital technical cameras strapped with Phase One 100 Megapixel backs. These cameras can now provide the resolution and color needed for archiving digital imagery.

Even though digital is now making its way into his workflow, Jarob does acknowledge that his team selects the right tool for the right job. There are instances that surrounding environments are not appropriate to use digital equipment and they’re better to resort to using film.

At the end of the interview, Jarob mentions that anybody can submit work to the National Park Service. They have a set of guidelines you can follow to capture images right in your own neighborhood! You can read through the guidelines to submit your work.

Interviewing Jarob was an incredibly eye-opening experience. Through his humble beginnings, his passion for the craft, and his attention to technical details, he is the perfect fit for the job. I have gained a huge amount of knowledge from his interview and have been inspired to be more involved in my community and to document it through pictures!

You can watch Jarob in action and learn a bit more about his job from this awesome interview by Milwaukee PBS:

And this feature by CBS This Morning:

About the author: Bill Manning is the co-host of Studio C-41, a podcast about film photography. You can also connect with Studio C-41 on Facebook, Twitter, and Instagram. This article was also published here.

All Pokémon GO Fest attendees get a Legendary Pokémon, Articuno coming next

The iPhone SE was the best phone Apple ever made, and now it’s dead

Samsung Galaxy M62 Tipped to Be in the Works, 256GB Inbuilt Storage Expected

Comcast is (update: was) leaking the names and passwords of customers’ wireless routers

Collectors rejoice! The NES Classic will be available in Best Buy today

Google’s newest app stops you burning through your data package

Photos on social media can predict the health of neighborhoods

Intel has just squeezed a ‘quantum computer’ on a silicon chip

Trek’s Commuter+ 7 is a beautiful – if pricey – electric bike

Google to launch a jobs search engine in the U.S.

Google’s head of diversity is leaving the company

Christmas lights photography: how to capture nighttime displays in all their glory