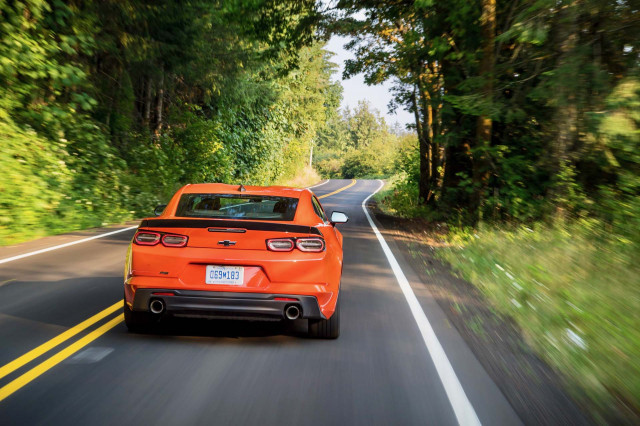 We drove the 2019 Chevrolet Camaro Turbo 1LE; possible details regarding the next-generation Ford Musang surfaced; and the 2020 Ford electric SUV was spied. It’s the Week in Reverse, right here at ‘Motor Authority.’

We slid behind the wheel of the turbocharged 2019 Chevrolet Camaro 1LE and found it to be a real athlete, but the car still has serious compromises with hampered storage and a small back seat. It could be a giant-killer on the track, but its impracticality could hold it back.

BMW teased the 8-Series Convertible with photos of a prototype undergoing hot-weather testing. Powertrains are unconfirmed but the coupe’s twin-turbo V-8 is likely on the docket. Expect a debut later in 2018.

Bugatti and Lego built a life-size, fully drivable Chiron out of plastic bricks. Made out of 4,032 Legos and powered by 2,304 motors, the car weighs over 1.5 tons and can hit 12 mph thanks to 5.3 horsepower and 62 pound-feet of torque.

Ford’s performance-oriented electric SUV was finally spotted testing on public roads. A steeply raked windshield, Mustang-inspired styling, and a size similar to that of the Ford Escape have all been confirmed by this prototype.

China's Geely teams up with Tencent on smart car tech

HP made a leather laptop

Rivian R1T electric pickup teased ahead of 2018 LA auto show, R1S SUV coming too
Netflix plans to have even more originals in 2021

The all-new Facebook Portal TV gets a $50 price cut

This is the Google Clips, a camera that uses AI to take photos

First drive review: The 2020 BMW M8 may be a large coupe, but it cooks

How to Create Full-Color Photos Using Only B&W Film

Hasselblad CEO Suddenly Steps Down Without Warning or Explanation

These Simple Animations Are an Intro to Film Photography

Facebook Moments launches in the EU & Canada without facial recognition

Bentley Flying Spur First Edition has one priority: You